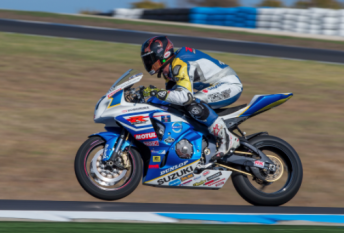 Maxwell was pleased with his opening race success.

“We couldn’t ask for much more today, a flag to flag win is a good way to start things off,” said Maxwell.

“I got a good start and the bike was very consistent. There are a few things we are not quite happy with but we’ll stick to our plan of trying as many different settings as we can over the weekend to collect as much data as possible.

“We’re keeping focused on the main goal which is being ready for the first point-scoring round of the championship in Tasmania.”

The Superbike/Prostock and Supersport fields will tomorrow contest the final races on their weekend schedule, 12 and 10 laps respectively.