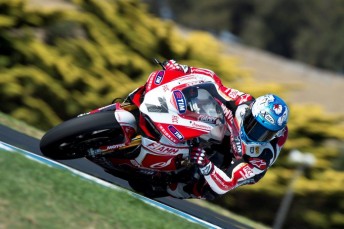 Carlos Checa will start from pole

Spain’s Carlos Checa has produced a masterful double at Phillip Island this afternoon by claiming pole position for tomorrow’s two 22-lap World Superbike races, as well as reclaiming bragging rights with the best ever lap around the 4.445km circuit.

Checa, a four-time WSBK ace winner at Phillip Island, wound up his factory Ducati to set a sensational 1m30.234s time in his last flying lap in the three-stage Superpole session, and he will be joined on the front row of the grid tomorrow by Aprilia pair Eugene Laverty (1:30.429) and Michel Fabrizio (1:30.581). It was Checa’s 10th pole position in WSBK racing.

Earlier, Fabrizio had lowered Checa’s best lap around Phillip Island to 1:30.387 in final qualifying, but the 40-year-old’s counter claim was flawless as he looks to give the all-new Panigale 1199RS off to a wining start in the 2013 season.

The nine riders battled it out in the final Superpole session, while among those to be shed in the first two sessions were Australia’s Jamie Stauffer (Honda), who crashed, and Italian Davide Giugliano (Aprilia).

Australia’s second rider, Glenn Allerton (BMW), didn’t compete in Superpole as it was only restricted to the top 15 riders in regulation qualifying. Allerton qualified in 16th position.