Nissan and Mercedes teams to debut with power deficit

Nissan and Mercedes teams to debut with power deficit 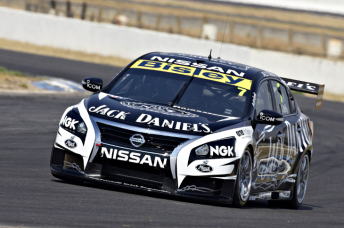 Nissan Motorsport ran its 003 and 004 chassis for the first time at Winton this week, with both running launch-specification VK56DE engines

V8 Supercars newcomers Nissan and Mercedes-Benz are bracing for a challenging start to the 2013 season as they continue to chase the horsepower figures of the existing Ford and Holden engines.

The Nissan and Erebus Motorsport teams have both supplied motors to V8 Supercars’ specialist Craig Hasted this week for comparison against the previously tested incumbent units.

The homologation process will only lock in an initial specification for the two new engines however, with both teams expecting to introduce multiple upgrades throughout the early part of the season as they edge towards the targeted power and torque curves.

The Nissan team has been busily cycling through a range of development parts on its own dyno this week prior to completing the build of its remaining engines for the Clipsal 500. Its engine is said to remain as much as 40bhp below the targeted peak figure.

Neither the Nissan VK56DE nor the Mercedes M159 will be granted any special concessions by V8 Supercars for the Adelaide meeting, although Nissan team co-owner and driver Todd Kelly says that he will request an increase in revs for the following event at Albert Park if further development hasn’t yielded significant dividends by then.

“I am concerned for how much it (a power deficit) will knock us around for Adelaide, but I’m extremely concerned if we don’t have anything sorted out for the Grand Prix and for Tassie (Symmons Plains),” Kelly told Speedcafe.com. 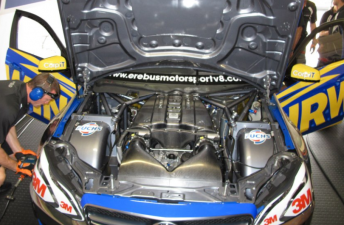 “We can probably get through with an ok weekend in Adelaide in the situation we’re in, but certainly not the two rounds after that. It’ll equate to a very big time loss at those tracks.”

Kelly reports being highly encouraged by the remainder of his team’s 2013 package, with brother and team-mate Rick Kelly’s best time at last weekend’s Sydney Motorsport Park test a relatively scant 0.7s away from the pace.

“We’re in the best position we’ve ever been in as a team with our chassis and, just as importantly our engineering group in terms of making the right engineering calls,” he said, having completed a full test day with the team’s two newest cars at Winton on Wednesday. “When we do get enough time to get the engines where they need to be we’ll be away. It’s just a matter of getting there as quick as we can.”

The current output of the Mercedes engine is also thought to be some way behind the leading Ford and Holden units, with team manager David Stuart confirming to Speedcafe.com that “there’s still a lot of development to go”.

The Mercedes’ engine specification has been a hot topic amongst much of the V8 Supercars community since the Sydney test, with many of the paddock’s key figures having seemingly been unaware of several freedoms granted to the German-engineered cars, including the use of a flat-plane crankshaft and fly-by-wire throttle system. 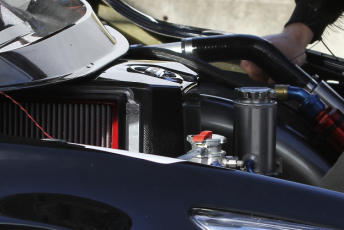 The tall VK56DE motor fits snugly underneath the Altima’s windscreen

Although Nissan is thought to be particularly aggrieved by the situation given the effort it has put in to matching as many of the specifications of the Ford and Holden engines as possible, Kelly declined to discuss the Benz’s specification, saying only that “the Mercedes engine is what it is, there’s not much I can do about it.”

Erebus team manager David Stuart gave a pragmatic response to suggestions that his squad had been handed any form of advantage as it and AMG’s German customer sports department rushed to design and homologate the car and engine in almost a third of the time of the Nissan.

“Any time that you are going to introduce a new manufacturer that manufacturer is going to want to introduce the technology that they employ in their road car, or their family of vehicles,” he told Speedcafe.com of the Mercedes’ specification, which also includes an electric power steering system.

“There has been a lot of comment about our engine, but at the end of the day V8 Supercars knows that you can’t have one car out there miles in front, or miles behind. It’s in everyone’s best interest that the parity or equalisation system works and there is no reason to think that engine parity will be handled any differently to the aerodynamic parity, for which all parties were happy with the outcome.”

The fuel economy of the two new double-overhead-cam engines, meanwhile, looms as a significant unknown heading to Adelaide, which is a marginal two-stop race if run under green flag conditions.