Kelly: No concerns over shoulder ahead of return

Kelly: No concerns over shoulder ahead of return 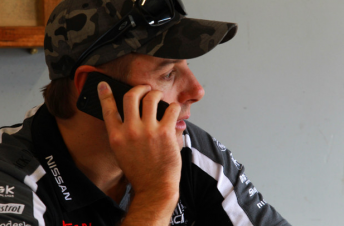 Todd Kelly says that his shoulder has fully recovered from the injury and resulting surgery that sidelined the former Bathurst winner for the final 10 races of the 2012 season.

Although the 33-year-old enjoyed brief stints behind the wheel of Nissan Motorsport’s test car in recent months, a test at Winton this week in his own  #7 Jack Daniel’s Racing Altima marked Kelly’s first extended hit-out since Bathurst last year.

The post-Bathurst surgery was deemed necessary after Kelly had sustained an injury during a tug-of-war exercise at a team training camp the previous month.

The Nissan Motorsport co-owner will receive a final check-up from his shoulder surgeon before heading to Adelaide next week, but is confident that a lack of ‘race fitness’ will be his only physical hurdle.

“I thought the shoulder may have been a bit of a drama but it wasn’t; the recovery process has been pretty rapid,” Kelly told Speedcafe.com of his condition following the mid-week Winton test.

“Funnily enough the shoulder was probably what coped best with getting back behind the wheel, it’s the rest of the body that needs to get used to it again.

“I’m probably fitter than what I was at any point last year but building up the exact muscles that you need in the car isn’t easy to do in the gym.

“It’ll certainly be a challenge to get through Adelaide from that point of view, but thankfully the new car seems to be a little bit kinder on us than the previous ones.”

The Adelaide event will mark the race debut of the four Nissan Motorsport Altimas, which will be driven by Kelly, his brother and fellow team co-owner Rick Kelly, James Moffat and Michael Caruso.