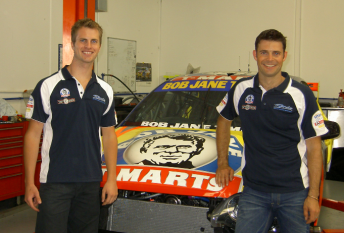 The 20-year-old Victorian will compete alongside the squad’s category regular Rodney Jane, driving the Triple Eight Ford Falcon FG chassis recently purchased by Sonic from Dean Fiore. Both Fords will run in the colours of Bob Jane T-Marts.

Jacobson replaces George Miedecke in Sonic’s Dunlop Series line-up, with the latter having moved to Matt Stone Racing for his second season in the class.

“I’ve really trusted (Sonic team owner) Mick (Ritter) with my career since joining the Sonic Family, and that’s really what it is, a family,” said Jacobson of his new deal.

“I’m working closely with my engineer and all our mechanics at Sonic and it’s really a natural extension of what I’ve been doing with them up until now anyway.”

Jacobson finished third in the 2012 Australian Formula Ford Championship despite enduring a season-ending accident at the penultimate round at Bathurst which left him with a broken arm.

Ritter, whose team finished second in the 2011 Dunlop Series with Jack Perkins, believes Jacobson is ready to move into what promises to be a hotly contested second-tier division this year.

“I certainly think Garry is ready for this, and he’s more than capable of meeting the challenges,” said Rtter.

“He’s been pretty hands on with us over the last year with the DVS program so he’s hardly coming in out of the cold. I think it’s an opportunity that he’ll grab with both hands.”