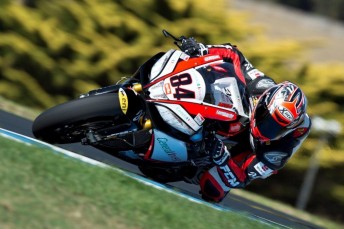 Italian Michel Fabrizio’s hot streak has continued in the season-opening round of the Superbike World Championship at Phillip Island, with the Aprilia rider setting the fastest time in today’s opening qualifying session.

But it was a tight affair all round, and only 0.567s separated Fabrizio from Honda’s Jonathan Rea (1:31.884) in 10th position. In between, all the other big guns were well positioned, including Aprilia’s Leon Camier, BMW’s Chaz Davies, Honda’s Leon Haslam and Kawasaki’s Tom Sykes.

Carlos Checa (Ducati), the recent Phillip Island master, could only manage the 12th fastest time after a big crash in this morning’s practice. Immediately in front of Checa was Australian wildcard Jamie Stauffer (Honda), the Kurri Kurri (NSW) rider dipping into the 1:31 bracket for the first time ever at Phillip Island with a brilliant late burst of speed.

Further qualifying and practice sessions will be held tomorrow at 9:45am and 12:30pm respectively, before the final run for grid positions in Superpole, which begins at 3:00pm.