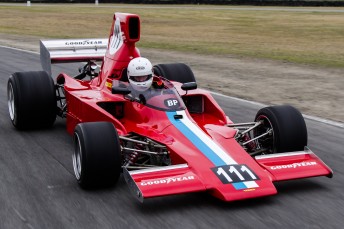 The much lauded MSC New Zealand F5000 Tasman Cup Series may never have started if it had not been for the contribution of founding member Stan Redmond who died yesterday.

The 65-year-old driver who was hugely popular among his rival drivers, suffered massive head and other internal injuries after crashing with another car at the Teretonga round of the series last Friday (February 15).

He applied the same commitment to his racing according to long-time friend and collaborator John Crawford.

“He was the start of it (Tasman Revival Series), the catalyst if you like,” Crawford said.

“This was at least 15 years ago now and at the time there were probably only one or two F5000 cars in New Zealand. Stan bought one of them and got me to drive it at a couple of the Skope Classic meetings.”

Redmond was one of 11 members of the F5000 association that was set up as part of the Historic Racing Club to run what became the Tasman Cup Revival Series.

“Our thoughts right now, obviously, are with Stan’s wife and family,” Abbott said.

“Stan was more than just a fellow competitor in our very tight-knight little group of the Formula 5000 Association. He was a friend, a mentor, someone who would always go out of this way to help and never expect anything in return.

“His generosity was legendary and it will be a very different world without him, that’s for sure.