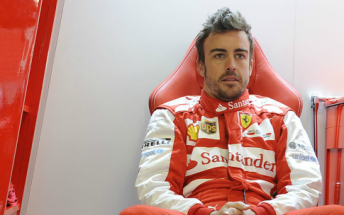 Fernando Alonso gathers his thoughts between on track stints

Fernando Alonso and Ferrari ended the third day of Barcelona’s pre-season Formula 1 test with the fastest time following an afternoon of comprehensive race simulation running at the Spanish circuit.

“Once again this year, the tyres will be one of the crucial aspects to manage – they are softer and quicker, but also less consistent and they degrade rapidly with every lap,” noted the Spaniard at day’s end.

“We will have a lot of work to do to understand how best to balance the car, but that applies to all the teams.”

Romain Grosjean was third in the Lotus with his program netting a day-high 119 laps, including an uninterrupted 66 lap race run that included four pitstops for tyre changes.

Mercedes enjoyed a second consecutive day of trouble-free running, with Rosberg completing 108 laps on his way to  the fourth fastest time.

Pastor Maldonado and Valtteri Bottas completed a race run each in the Williams to end up fifth and sixth respectively.

Jenson Button was a disappointing seventh in the McLaren, which topped the sheets on Day 2 thanks to team-mate Sergio Perez.

“It’s been very tricky to understand where the car is,” said the 2009 World Champion. “At times the car feels good, at other times it doesn’t.”

Adrian Sutil was eighth fastest in his first run for Force India since being dropped by the team at the end of the 2010 season. The German and Frenchman Jules Bianchi both remain in contention for the race drive – the final unconfirmed seat of the year.

The Barcelona test will conclude with a fourth and final day tomorrow.