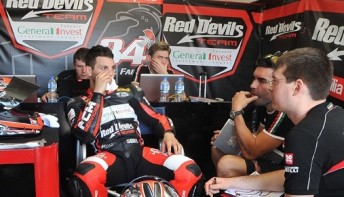 Italian privateer Michel Fabrizio has upstaged his factory-backed counterparts to set the fastest time on his Aprilia in opening practice for the Superbike World Championship opener at Phillip Island.

Fabrizio, a  past winner at Phillip Island in 2010, set a best lap of 1:31.218s in the 45-minute session, followed by Honda’s Leon Haslam, Suzuki’s Leon Camier, Aprilia’s Sylvain Guintoli and BMW’s Chaz Davies.

Most of the other championship top brass were in the bottom half of the top 10, including Tom Sykes (Kawasaki), Marco Melandri (BMW), Jonathan Rea (Honda) and Carlos Checa (Ducati). Australia’s Jamie Stauffer (Honda) was 12th, three spots in front of countryman Glenn Allerton (BMW).

Checa crashed hard at turn six during the session, but the carnage was far worse in the preceding World Supersport practice hitout when the red-flag had to come out five times because of incidents right around the 4.445km circuit.

Australian duo Josh Hook (Honda) and Mitchell Carr (Triumph) both went down, with their bikes suffering extensive damage. Hook’s team is now preparing a makeshift CBR600RR for Hook to continue competing, but it’s unlikely to be ready in time for this afternoon’s opening qualifying session.