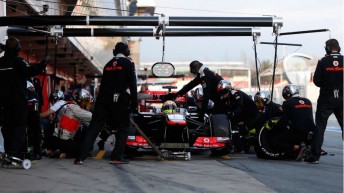 Sergio Perez and the McLaren team during testing at Barcelona

New McLaren recruit Sergio Perez has expressed concern over the extreme degradation of Pirelli’s 2013 specification soft compound rubber after topping the time sheets on the second day of testing at Barcelona.

“The degradation of the tyres is very difficult. It is a big surprise,” noted Perez, a driver renowned for his ability to nurse the previous generations of Pirellis while at Sauber.

Vettel meanwhile had been fastest at the lunch time break but struck trouble in the afternoon – his Red Bull stopping on the circuit during a planned race simulation run.

There were worse reliability issues for third-fastest man Kimi Raikkonen, who completed just 43 laps across the day after a lengthy stint in the garage for a gearbox change in his Lotus.

By contrast, Lewis Hamilton ran a day-high 121 laps on his way to fourth fastest – a clear relief for the previously stop-start Mercedes test program.

Testing will continue tomorrow, where German Adrian Sutil will join Force India as he continues to tussle over the final seat on the Formula 1 grid with rising French star Jules Bianchi.