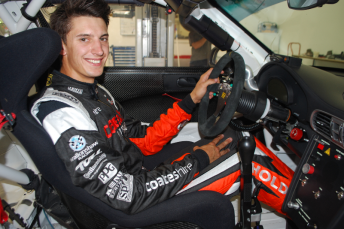 The 24-year-old finished fourth in last year’s Dunlop Series after winning a season-high six races, but once again proved unable to break into the V8 Supercars Championship on a full-time basis ahead of the new season.

With Walkinshaw Racing joining Ford Performance Racing in electing against fielding a Dunlop Series entry this year, the 2011 Supercheap Auto Bathurst 1000 winner has moved to BRM with the support of his previous backers Coates Hire.

Percat has experience with the South Australian team having driven Formula Ford and Formula 3 cars for the squad prior to moving to the Development Series, and says he’s looking forward to a new challenge.

“Carrera Cup is definitely one of the most competitive racing championships in the country and I can’t wait to line up against the likes of Craig Baird and Warren Luff at the Clipsal 500,” said Percat, who will have his first taste of a 997 GT3 Cup Car at Winton today.

“To be competitive in Carrera Cup you’ve got to be legitimately fast and consistent as there is such great parity between the cars.

“If I can be competitive in a Porsche, then it will add another feather in my cap as a driver.”

Percat remains under contract to Walkinshaw Racing and is expected to drive a Clayton-built Commodore in this year’s three V8 Supercars endurance events.

It is unlikely that he’ll appear in Holden Racing Team red, however, as the team has already locked away Greg Murphy and Ryan Briscoe for its factory entries.