Monster out, Milwaukee in for Pretty Ute campaign

Monster out, Milwaukee in for Pretty Ute campaign 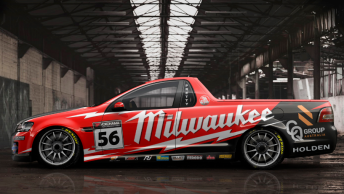 Nathan Pretty will return for a third full season in the Auto One V8 Ute Racing Series with a new major backer.

Previous associate sponsor Milwaukee tools has stepped up its commitment to the team following the withdrawal of Monster Energy.

Pretty finished third in the 2012 series, taking a single round win at Symmons Plains, and sees himself as the favourite for this year’s title.

‘We had a great run last year in a season although it saw a lot of things go against us,” he said.

“The aim is to have the red Milwaukee Holden on the top step of the championship podium come December.”

Pretty will have to contend with several newcomers to the V8 Ute Series this year including former Dunlop Series runner Elliot Barbour, who’ll compete with Sieders Racing.