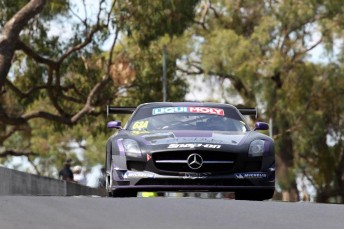 Hackett, who had enjoyed the backing of Erebus owner Betty Klimenko for more than a decade, announced his departure from the team via his own Facebook page this afternoon.

A subsequent team statement stressed that Hackett could rejoin the squad if he can meet the requirements of “a commercial solution” offered to him.

“There may be opportunities for us to work together in the future, which we can explore as they come to hand.”

Hackett is known to be well liked by Mercedes-Benz Australia, holding down the role of chief driving instructor for the company’s driving academy.

Erebus Motorsport, whose participation in the Australian GT Championship beyond Clipsal is in doubt, says it will announce its second driver for the Adelaide event in the coming days.

Baird, meanwhile, opened his Australian GT Championship points account by driving the Clearwater Ferrari in the recent Bathurst 12 Hour, and is expected to form part of Erebus’ V8 Supercars endurance line-up later in the year.