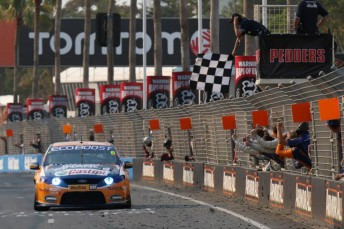 V8 Supercars has confirmed that it will introduce a three-event Endurance Cup as the international co-driver format for the Armor All Gold Coast 600 comes to an end.

As previously reported, the Endurance Cup will be awarded to the highest scoring driver or driver pairing across the Sandown 500, Supercheap Auto Bathurst 1000 and Armor All Gold Coast 600 weekends.

The changes come in the final year of V8 Supercars’ current contract with the Queensland government to stage the Surfers Paradise street race, after which its future appears uncertain.

In a statement announcing the Endurance Cup, V8 Supercar Commission Chairman Mark Skaife emphasised the importance of confirming the new format to teams as early as possible.

“The Endurance Cup means that teams can choose one driver as their co-driver for all three events which allows them to train and plan for the longer stints,” he said.

“These cars are not easy to drive on a one-off basis. While the Car of the Future will be more ‘driver friendly’ it’s very difficult to transition into a race mode V8 Supercar with limited preparation.

“This way teams can spend the next eight months choosing and preparing the drivers they believe are best equipped across all three races.”

Although there will be no requirement to run an international on the Gold Coast, several are expected to be seen over the course of the ‘endurance season’.

The opening year of the format in 2010 required just one international per team instead of per car, enabling the not-so-international co-drivers Cameron McConville and Steve Owen to chalk up victories.