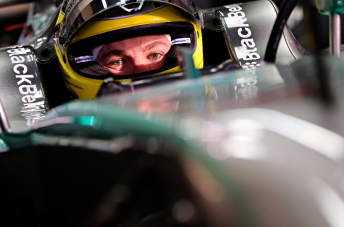 Having had his Jerez running severely hampered by electrical issues, Rosberg spent much of the opening day in Barcelona garage-bound with gearbox issues.

Although completing only half the number of laps that Fernando Alonso managed in the Ferrari, a late run on the medium compound Pirelli’s netted Rosberg the fastest time of 1:22.62s.

“It’s a much, much better base,” Rosberg told reporters aferward when asked to compare the new Mercedes to its predecessor.

“You can feel its centre of gravity is lower. The aero is better. The platform is better.

“It feels a lot stronger. It’s a pleasure to drive because it’s a lot faster than last year.

“We have a few too many reliability issues at the moment. Other than that, it’s definitely going in the right direction,” he added.

Kimi Raikkonen was another to set a late flyer but fell 0.007s short of Rosberg’s time, while Alonso and morning pace-setter Sebastian Vettel completed the top four.

Pastor Maldonado was given the task of debuting the new Williams, ending the day fifth.

The day wasn’t without its setbacks for the British team however as the FIA informed it and Caterham that elements of their exhaust packages contravene the regulations.

Testing will continue at the Spanish venue tomorrow.