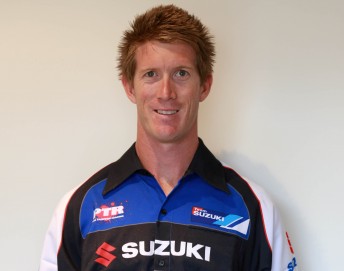 No less than seven manufacturers will make up the grid for this weekend’s opening round of the Honda Australian Prostock Championship and the QBE Australian Superbike Championship’s highly-anticipated ‘WSBK Cup’.

Racing as part of the World Superbike and Supersport rounds, the national event marks the first point-scoring opportunity for the Prostock class and is an important measure of momentum and form for Superbike riders, despite being a non-championship event.

With the factory Honda pairing of Jamie Stauffer and Josh Hook and Next Gen Motorsport BMW’s Glenn Allerton handed WSBK wildcard entries, the door has been left ajar for new Suzuki signing Wayne Maxwell to make his mark.

In the off-season, Maxwell made the move to the vacated seat of Josh Waters who has claimed a coveted ride in British Superbike and World Endurance competition.

Few can deny Maxwell’s dominance at his home circuit, and he is determined to prove a point this weekend despite the event’s non-championship status.

“This weekend’s going to be a great chance to learn more about the bike and see what it’s like in race trim, I’ve had a chance to do some testing but nothing compares to an actual race situation,” said Maxwell.

“For much of the time I’ve been in the ASBK Phil Tainton and Suzuki have been my main Championship rivals and everything just fell into place to make the change and go racing as part of their team.

“I’ve been runner-up quite a few times so this could be the breath of fresh air I need to go one better.

“I’ll be watching the guys who have wildcards in the World Superbikes very closely, their progress will be a good indication of how well they’re adapting to the Pirelli tyre.”

The Superbike category will see a host of familiar faces, including Linden Magee, Glenn Scott and Chas Hern, stepping up from other classes to lay down the challenge.

Prostock competitors will be fighting for both position and points when the lights go out on the weekend’s two 12-lap races.

New BMW signing Ben Nicolson is hopeful of opening his campaign with a healthy pointscore.

“The move from Kawasaki to BMW has been a big one – last year it was just myself and my Dad and now I’m on board with one of the biggest and most professional teams in the paddock,” said Nicolson.

“The bike is coming on strong but the real test will be getting up to speed for a good qualifying position and then putting in two solid races.

“I’ve never really had my best results at Phillip Island so this is a good opportunity to turn things around.”

33 bikes will be on the grid for the combined Superbike/WSBK Cup and Prostock races which will play out in front of a huge international crowd, both trackside and on television.