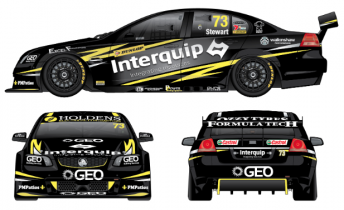 West Australian Brett Stewart has revealed the new look he will carry into the 2013 Dunlop Series.

Now in his third year of competition in the Dunlop Series ranks, Stewart has secured a raft of new sponsors for his ex-Paul Morris Motorsport Commodore VE chassis.

The chassis, known as ‘Kulwicki’, will be housed at the PMM workshop in Norwell, Queensland, with Stewart providing his own crew for the seven-round series.

While he says that he’d like to improve on his 17th place overall from last year, Stewart is looking forward to sharing the race track with Casey Stoner, who will drive a Red Bull/Pirtek-backed Commodore VE in the class.

“It’s an absolute honour to be racing against Casey Stoner,” Stewart told Speedcafe.com.

“To be honest, I can’t wait to meet him, let alone race against him.

“The Dunlop Series and V8 Supercars will never have so much attention placed on it, thanks to Casey’s involvement, and it’s going to be great to be a part of that.”

Stewart’s new car will be seen for the first time in the opening round of the Dunlop Series, supporting the Clipsal 500 Adelaide, on February 28-March 3.