Nissan engine upgrades to be tested at Winton

Nissan engine upgrades to be tested at Winton 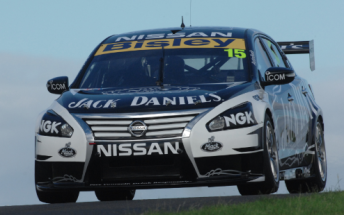 Nissan Motorsport will test a number of engine modifications ahead of the final homologation of the VK56DE power plant.

After electing to only test two of their four cars at Winton Motor Raceway last Saturday (for Rick Kelly and James Moffat), the team will shakedown and test the other two cars of Todd Kelly and Michael Caruso at Winton on Wednesday, complete with vital engine upgrades.

With the shape and aerodynamics of each of V8’s four manufacturers being finalised last week, the homologation of the Nissan and Mercedes engines remains the last major milestone in the Car of the Future project.

Team owner/driver Todd Kelly says that he is hopeful the new upgrades will ensure the Altima’s engines head to the homologation process as a competitive package.

“Both my car and Michael’s car were ready (for Saturday’s Eastern Creek test), but we’ve come up with two or three big things for the engines, and we didn’t have enough time to change the specification of the other engines, ” Kelly told Speedcafe.com.

“Given that the most important thing is having a good run at Clipsal, we wanted to make sure we’re in the best position.

“We’re confident that this will get more out of the engine, and when that happens, we’ll have a great package.”

Kelly was encouraged by the test results at Sydney Motorsport Park, with his brother Rick ending the day fifth and Moffat ninth.

“It’s the first time that car #15 has turned a wheel. It’s a brand new car. It hasn’t even done a shakedown, so it was a dream run,” he said.

“The cars have been pretty pacey. On the engineering side, with all the simulation and engineering work, I think we have produced a really good car.

“We still have a fair bit of work to do refining the engine package, but the car is certainly masking that at the moment.”

Nissan Motorsport will be one of few Victorian V8 teams to test prior to the Clipsal 500 in two weeks time. The Holden Racing Team, Ford Performance Racing and Brad Jones Racing had all planned to test today, however, have pulled out of the test.

Kelly says that after a hectic 12 months of designing, engineering and building the team’s factory entries, he is looking forward to getting through the opening two events of the season.

“It will be good to come out the other side of Symmons. By then, we’ll be on top of our spares package,” Kelly said.

“All the departments have been under the pump. They have been trying to get our inventory up to a reasonable level.

“We’ve obviously got enough parts and spare to get four cars going, but there’s still a huge amount of work to do.”