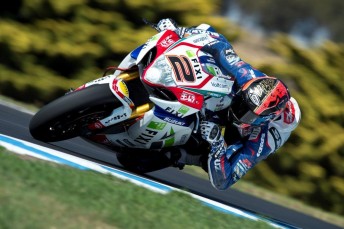 Leon Camier was quickest aboard his Suzuki

Suzuki’s big hope Leon Camier has set the fastest time on day one of official pre-season testing at Phillip Island ahead of the season-opening round this weekend.

Eight other riders also recorded times in the 1:31 bracket, and the gap between the top 12 fastest bikes was less than a second – with Australian wildcard Jamie Stauffer sneaking his Honda into the mix.

Stauffer was in 12th, and fellow Aussie wildcard Glenn Allerton (BMW) was 18th in the field of 20 riders.

In World Supersport, 20-year-old Australian Josh Hook from Taree is already raising eyebrows with his speed and tenacity on his Honda, and was seventh fastest today. Briton Sam Lowes was the fastest on another Honda, ahead of reigning world champion Kenan Sofuoglu (Kawasaki).

Testing for World Superbike and World Supersport will conclude today.