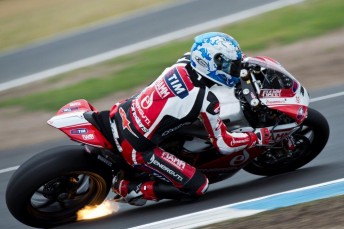 Carlos Checa was fastest aboard his Ducati

Carlos Checa vaulted up the timesheets on the second and final day of the official World Superbike test at Phillip Island.

The Spaniard was fastest on his Ducati on the recently resurfaced 4.445km grand prix circuit, ahead of Italian BMW rider Marco Melandri and Briton Leon Camier on a Suzuki.

Checa, a four-time WSBK race winner at Phillip Island over the last three years, set a best lap of 1m31.059s on his new Panigale 1199RS. He is sure to be amongst the leaders when official practice gets underway this Friday for the season opener.

Based on the sizzling times set over the last two days on the new track, this Phillip Island WSBK round is shaping up to be the fastest on record, with the current lap record of 1:31.785 of Max Biaggi (2012) set to be dismantled in Sunday’s pair of 22-lap races.

There was less than one second between the top 12 riders over the two days, with title heavyweights such as Jonathan Rea (Honda), Eugene Laverty (Aprilia), Leon Haslam (Honda) and Sylvain Guintoli (Aprilia) all producing times which will ensure they also give Sunday’s races a big shake.

Australia’s wild card, Sydney’s Glenn Allerton (BMW) was 13th fastest in the test, going nearly two seconds faster on day two to stop the clock at 1:32.159; while Melbourne’s Jamie Stauffer (Honda, 1:32.231) was right behind in 14th.

Twenty-one riders made it out onto the track today, including Checa’s team-mate Ayrton Badovini for the first time since a big crash in private testing at Phillip Island last Friday.