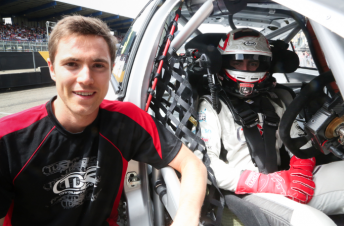 It will be McBride’s first tilt at a major Australian series, having spent the past two seasons in the United Kingdom competing in British Formula Ford and Formula 3.

He says he is looking forward to the new challenge of racing a V8.

“I’m really excited and this is a massive opportunity that Tony and Al D’Alberto have presented me,” said McBride.

“It’s an FPR car, and Tony has run it for the past couple of years, so the team has a great amount of experience with it.

“Best of all, I have Tony who’ll be able to help me, answer my questions and fast-track my learning in the car and the category.

“It’s obviously going to be super competitive out there. There’s a lot of good cars and good drivers, so I don’t really have any expectations yet. I’ll just wait until we get through the first round at Clipsal, see where we are and see how I fit in.”

While McBride will be a V8 Supercars rookie, TDR is no stranger, with the team competing in five series since 2005. The team’s time in the series includes winning the title in 2007.

Team owner Al D’Alberto says that McBride will be a good fit for his team.

“We are looking forward to getting back into the Dunlop Series with Nick,” said D’Alberto.

“We’ve had a great history in the series, winning it in 2007, and I believe we have a strong car and a fast driver to be competitive again this year.

“Nick is a very polite, talented young man and we’re very pleased to be working with him in 2013.”

McBride will test at Winton prior to the opening event of the Dunlop Series, to be held in Adelaide as part of the Clipsal 500 on February 28-March 3.