Using the same software as the popular ‘Grand Prix Predictor’ that international website Autosport.com uses for its Formula 1 tipping competition, V8 Supercars fans will now be able to put their knowledge to the test with the Castrol EDGE V8 Predictor in 2013.

The Predictor kicks off with the first round in Adelaide on February 28 and runs through to the final race of the season in Sydney on 29 November.  The Castrol EDGE V8 Predictor is completely free to play and will offer some amazing prizes.

Players will score points for their predictions at every event, with prizes on offer for round wins. 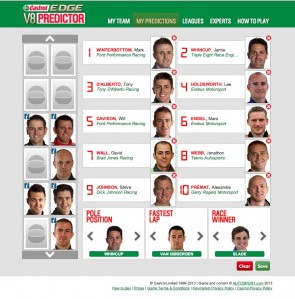 A panel of experts will register their predictions for each round giving players the chance to predict against the best in the business.

Play against your mates, colleagues and family in V8 Predictor mini-leagues, tip the winners and have the chance at winning some amazing prizes.

CLICK HERE to sign up now to get your predictions in before the opening round in Adelaide, which starts on February 28, 2013.

See below for Speedcafe.com’s video teaser for the Castrol EDGE V8 Predictor.