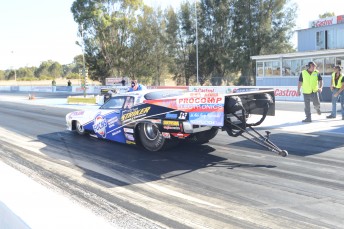 Over 3000 people packed the South-Western Victorian venue for the event and were not disappointed with a number of fast times being laid down throughout the competition.

Russ Pavey was the first to reset the track record in qualifying before Victor Bray set a new quickest time in the first round with a 4.078 second pass over the 660ft (200m) distance.

Bray was eliminated from competition in the semi-finals losing out to Kapiris after going for an aggressive setup and overpowering the track two thirds of the way through the pass.

His son, Ben Bray was victim to the all conquering Zappia, who will seek for another ANDRA Drag Racing Series win at the Perth Motorplex (March 1-2).

Zappia went on to defeat Kapiris – who is proving to be one of the toughest racers in the country right now – in the final.

A major incident in qualifying saw Sean Mifsud get all out of shape and collect the wall at nearly 300kph. Mifsud escaped the incident unharmed, the same couldn’t be said for his racecar which was heavily damaged in the incident.

With Doorslammer’s eyes back on ANDRA quarter-mile racing, the next Slamfest will be at Queensland’s Benaraby Raceway, June 29.