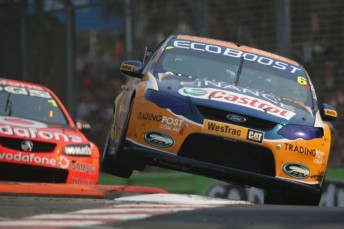 The Armor All Gold Coast 600’s international co-driver format  is expected to be dropped ahead of this October’s event.

The V8 Supercars teams have been required to run internationally renowned co-drivers on the Gold Coast since 2010 in order to create overseas interest in the race.

The 2013 Surfers Paradise event is the last on the current contract between V8 Supercars and the Queensland government.

Relaxing the regulations to allow local co-drivers is expected to save money for both the government and the teams.

A V8 Supercars spokesman confirmed to Speedcafe.com that an announcement about the event’s format will be made “soon”.

The change will significantly alter the endurance co-driver market, which in recent years has prevented even internationals from completing a Sandown, Bathurst and Gold Coast triple-header.

Previous Gold Coast regulars Mika Salo and Ryan Briscoe are both known to be eyeing drives in all three events with factory teams Ford Performance Racing and the Holden Racing Team respectively.

It remains unclear, however, whether local co-drivers will be allowed to run all three events with the same team.

Red Bull Racing Australia announced last week that it has retained Paul Dumbrell and Warren Luff for Sandown and Bathurst. Both drivers told Speedcafe.com that they are not yet locked in for the Gold Coast.