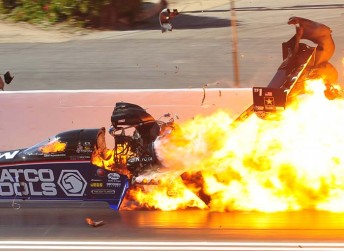 Antron Brown walked away from this inferno (PIC: CompetitionPlus.com/Marty Reger)

2012 NHRA Top Fuel Champion, Antron Brown has walked away from an horrific crash in the second round of eliminations at the Winternationals at Pomona in California – the opening round of the 2013 Mello Yello Drag Racing Series.

Brown got to the finish line of his second round contest against Australian Dave Grubnic when his Matco Tools dragster exploded into flames.

In the vivid image of the explosion taken by CompetitionPlus.com’s Marty Reger, one can clearly see the flames inside Brown’s driver cocoon – something that has become more prevalent in this year’s Series after its debut with Tony Schumacher last year.

Brown’s car rolled onto its side and was destroyed in the incident. Despite winning the race in 3.8 seconds at 496.7kph (308.64mph), Brown was unable to take part in the remainder of proceedings.

Miraculously, he exited the cockpit under his own steam.

“I have a few little brush burns on my knee, but besides that, I’m good to go,” Brown told the crowd. “The capsule did its job – thank God for that.”

Earlier in the weekend, Tony Schumacher had a parachute failure – testing his capsule out when his US Army dragster was sent into the sandtrap at the end of the strip. He was able to take his place in eliminations with no injury.

Eliminations are still continuing. A full report will follow.