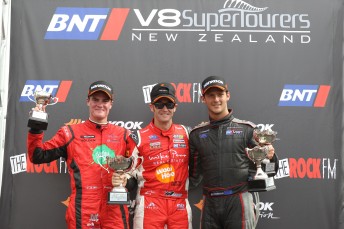 Greg Murphy emerged without a scratch on his Mike Pero-backed Commodore to clean-sweep the opening round of the BNT V8 SuperTourer Championship at Hampton Downs.

In form which many associate with Murphy’s affinity for Pukekohe, the four-times Bathurst 1000 champ proved unstoppable, beating Shane van Gisbergen and John McIntyre in the final 30-lap race.

Drivers battled debris and an oil trail that started around turn two and spread until the last corner which remained for the majority of the race. CLICK HERE to read full story and results on Speedcafe.co.nz