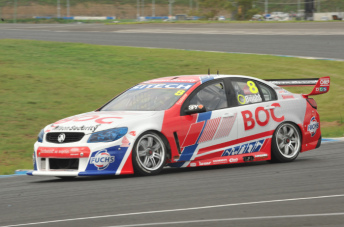 Brad Jones Racing has ended the morning running at Sydney Motorsport Park’s pre-season V8 Supercars test with drivers Jason Bright and Fabian Coulthard at the top of the time sheets.

Bright’s best time of 1:30.63s was set 80 minutes into the 200 minute session, with a midday break following for an on-track autograph signing.

A second 210 minute hit-out will take place in the afternoon, including a period dedicated to double-file rolling restart practice.

Holden Racing Team driver James Courtney was third in the morning having held the top spot for an extended period.

Rick Kelly was fourth despite the Jack Daniel’s Racing Nissan Altima enduring a short stay in its garage with a dropped oil line. The problem had created a spectacular plume of smoke down the main straight.

Reigning champion Jamie Whincup was just 18th fastest after he and Red Bull Racing Australia team-mate Lowndes spent the morning in and out of the pits making set-up changes.

Twenty-five cars have made it to the Western Sydney venue for the test, with only two of Nissan Motorsport’s Altima’s and one of Dick Johnson Racing’s Falcons failing to show.

DJR’s #12 Ford of Tim Blanchard and BJRs #21 Holden of David Wall both arrived at the circuit in the early hours of the morning after being completed at their respective Queensland and Victorian workshops.

Blanchard managed just seven laps during the morning as his team ironed the bugs out of its car, while Wall ran 12.

The pair were split by Engel at the bottom of the order, with the German just 3.2s away from the pace on his first morning in a V8 Supercar.