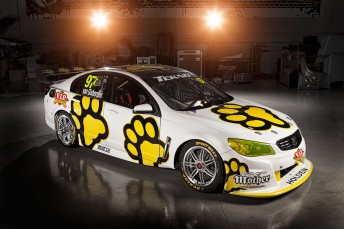 Tekno Autosports will compete in the pre-season V8 Supercars test at Sydney Motorsport Park in a pair of one-off testing liveries tomorrow.

Webb says that ‘Project 40’ is an important matter to him and his team.

“School zone speed limits have been around for many years now, yet the public still aren’t paying them enough attention,” said Webb. “We’re proud to be associated with this unique road safety campaign, and to be partnered with NSW Police in reinforcing this very important message.

“This is something that resonates strongly with me, as I have school-age nieces and nephews. We also have to do 40km/h in pit lane, so if a V8 Supercar can do it, you can do it on the road too!.”

For van Gisbergen, the test marks his first time with Tekno and new sponsor VIP Petfoods, who will back his entry in 2013.

VIP Petfoods owner Tony Quinn says that the livery is a great way to kick off the relationship.

“We have taken big steps in partnering with TEKNO and Shane for 2013, and this livery is a dramatic visual demonstration of this,” said Quinn.

“In taking these steps, we were very mindful of making a clean break from the past, and showing the V.I.P. brand in a fresh, new way. I couldn’t be more pleased with this special test-only livery.”

The Tekno Autosports team will be seen for the first time at Sydney Motorsport Park, Eastern Creek, this Saturday.