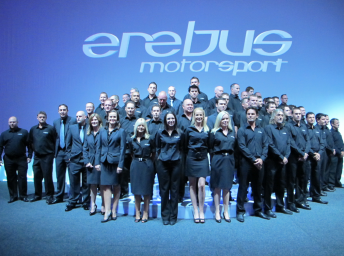 The Erebus Motorsport V8 team at the launch

Erebus Motorsport’s top brass have paid tribute to the hard yards put in by their Gold Coast-based workshop crew in order to prepare its three Mercedes-Benz E63 AMG V8 Supercars in time for tonight’s team launch.

The public unveiling took place just 109 days after the team’s AMG Customer Sports deal was finally given the green light by Mercedes-Benz Australia.

The cars have been co-developed by the AMG factory in Germany and the formerly Stone Brothers Racing equip in Yatala, Queensland.

“No words can do justice to the amount of work that our guys have put in, they are the heroes,” Erebus CEO Ryan Maddison told Speedcafe.com at the launch.

“I could tell you five to 10 different stories about guys sleeping on creepers under cars, guys sleeping on towels under their benches… parents, wifes, girlfriends coming to the workshop to visit their loved ones on our team. And they did it without being questioned.”

“No,” he added when asked if he ever questioned whether the task would be completed in time after the deal was done. “It was just a matter of what resources we needed to put to it. ”

According to Maddison, the project required “an evolution in IT that the sport has not seen”, with large CAD files needing to be transferred between the two bases.

“This obviously starts in a virtual world to begin with and we had to find ways and means of sending files,” said Maddison. “(On top of that), every 48 hours or more we were on the phone communicating backwards and forwards.

“Probably the biggest thing we needed to make sure that didn’t exist was a language barrier.

“In Australia, a nut means a nut, but in Germany a nut means a socket. If you take that and multiply it across the whole build program… we needed to make sure that we didn’t suffer those types of discrepancies.”

The team says that 10,500kg of freight across 23 separate flights was shipped back and forth between the two countries, which included the early dispatch of one of SBR’s previous-generation Ford engines to Germany for the benefit of the AMG boffins.

In the last month since the first Mercedes chassis completed an initial shakedown, the team has completed the necessary aerodynamic testing and homologation process, run its two Accredited Manufacturer test days and, as of Monday, has shaken down all three of its race chassis.

Like Nissan’s VK56DE, the specifically-designed 5.0 litre version of AMG’s M159 engine is yet to be fully homologated with V8 Supercars – a process that is expected to take place next week.

With the team planning on undertaking two more test days between this weekend’s hit-out at Sydney Motorsport Park and the season-opening Clipsal 500, Maddison says that ensuring the crew are fresh for Adelaide is now a major priority.

“Over the last few weeks we’ve been in sleep deprivation management to make sure we get here with some guys that are refreshed,” he said.

“The guys put the cars in the truck to come here at half past one this morning, which believe it or not was an early night for them.

“These guys have earned a break. Once we get past Saturday, we’re going to have to tell some staff, depending on what their task is, to down tools and recuperate for 48 to 72 hours so that we can step out to Clipsal on the right foot.”

For many, the highlight of the lavish night came late in proceedings, with team members firing the engine of the #47 Heavy Haulage Australia backed entry into life.

Saturday’s SMP test will provide the team with a chance to compare itself to its opposition for the first time, in addition to seeing German import Maro Engel take to the track for his maiden laps.