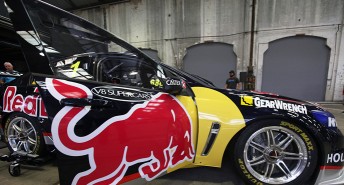 Triple Eight will embark on a data gathering frenzy at Sydney Motorsport Park’s official pre-season test this weekend as the squad’s Car of the Future program ventures outside of Queensland Raceway for the first time.

The now Red Bull-backed team completed its two Accredited Manufacturer days at Ipswich with a VE-bodied test car last year. Unlike fellow heavy-hitters Ford Performance Racing, the Holden Racing Team and Nissan Motorsport, the squad waived its right to test at an alternate venue as it waited for clearance to run the new VF bodywork.

All six Triple Eight-built Holdens – to be campaigned by Red Bull Racing Australia, Tekno Autosports and Lucas Dumbrell Motorsports – hit the track at QR on Monday, just a day after the corresponding road car was launched.

RBRA, whose technical director Ludo Lacroix designed the VF racecar’s aero kit, completed a full day of running, while Tekno (which returned for a full day on Tuesday) and LDM undertook shakedowns.

The Melbourne-based Garry Rogers Motorsport is the only other Holden team to enjoy a full day of VF testing prior to Saturday, having run its two cars at Winton on Tuesday.

“Running in Sydney this weekend will be a good opportunity to validate what we know about the new aero package already, as well as just putting more mileage on all of the other components,” RBRA team manager Adrian Burgess told Speedcafe.com.

“Running at QR only gives you one gauge so we need to go to more circuits to fully understand the behaviour of the aero package on different tracks. “Clearly it will interact differently (to the VE). The weight distribution is completely different, so the way the aero is on the car is designed around that. They’re the things we’ll be playing with this weekend.”

While the success of this weekend’s test will determine whether RBRA squeezes in another test day at Ipswich before the Clipsal 500, Burgess says that he doesn’t feel that the lateness of the VF bodywork’s availability has hampered the team’s season build-up.

“It was later than ideal but equally the more time you have in the factory pre-season, the more organised you can be,” he said.

“We don’t feel any less prepared. Two or three days with the car before going to Adelaide will be enough for us.

“If we need to do more we’ll do more. We’ve been working hard since the break and we’re happy with how we’ve prepared, we don’t feel we’re missing anything at the moment. But we need to put the car on the track more times in case any issues crop up.”

RBRA drivers Jamie Whincup and Craig Lowndes are understandably eager for more seat time, with Whincup describing the team’s current package as only 60 percent of its potential.

“The testing we did at the end of last year was interrupted and in a test car,” Whincup told Speedcafe.com.

“The car is only 60 percent refined at the moment, and hopefully everyone else is at about the same level.

“I think the challenge for the year will be to work with the mechanics and engineers to get the car refined to 95 percent or 100, which we know is not really possible.”

“It was encouraging,” added Lowndes of Monday’s test.

“I believe the VF upgrades have given the car some more front-turn. Obviously it’s a marked improvement on what we had last year, but there’s obviously things we need to understand and learn about.

“We need to understand how much or how little to make a change to the car to have an effect. There are also all of the things on the COTF, the independent rear end and the bigger wheels, bigger brakes, like everyone we’re going through that learning process. The car’s got great potential, we’ve just got to extract it.”

Scott Pye’s #80 LDM entry meanwhile will be engineered by Brendan Hogan, who joined LDM in the latter part of 2012 after a stint with Kelly Racing.

Triple Eight will start the season with two spare chassis – the original test car (888-030) and its almost-complete latest creation (888-037).