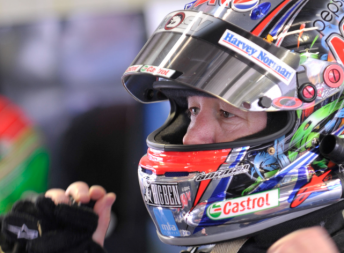 Greg Murphy could race a wildcard entry at Pukekohe

Greg Murphy’s reign as the V8 Supercars king of Pukekohe could continue in April with the Kiwi superstar aiming to put together a wildcard deal for the event.

If Murphy’s plan comes to fruition, he would drive a fourth Walkinshaw Racing-prepared Commodore VF.

Murphy told The New Zealand Herald that the idea was still fresh.

“We only started talking about it a few days ago,” Murphy said.

“I don’t want to go out there and say that it’s a definite possibility, but the idea has been floated.

“It’s a massive undertaking and if it was to happen it would have to be with HRT (Holden Racing Team) as I’m already with them for the endurance rounds. Their focus is with James (Courtney) and Garth (Tander) at the moment.

“It would be fantastic to be able to do something like that but it’s the amount of money involved. If there’s anyone out here who like to tip some cash in, then anything is possible.”

Money and time are the key factors, but with Russell Ingall to switch to a new car in April, a chassis would be available.

Murphy has an unrivalled record in V8 Supercars at the Pukekohe circuit, having won four of the first five championship events held at the track between 2001 and 2007. He also won the non-championship races at the circuit in 1996, ironically, driving for the Holden Racing Team.

CLICK HERE to read the full article in The New Zealand Herald.