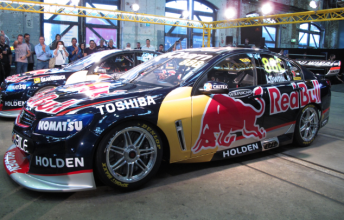 The two cars were revealed by team drivers Jamie Whincup and Craig Lowndes in front of a large crowd, including V8 Supercars dignitaries, media, sponsors and celebrities.

The team’s endurance drivers Paul Dumbrell and Warren Luff were also at the launch.

CLICK HERE for a gallery of images from the Red Bull launch.

The cars will compete in identical liveries aside from the windscreen banners which will see Maverick on Whincup’s car and Autobarn on Lowndes’s Commodore.

The deal for the energy drink giant to enter the sport is a multi-year agreement, replacing Vodafone as the major backer of the reigning champion team.

Red Bull Racing tested last Monday at Queensland Raceway in a plain black livery. It was the first time that the team had tested the new Holden Commodore VF.

The #1 and #888 Red Bull Racing Australia Commodores will be seen on track for the first time at Sydney Motorsport Park this Saturday.

Besides the two V8 Supercars Championship entries, Red Bull will also back the team’s Dunlop Series program for Casey Stoner.

The livery of Stoner’s car will be revealed on the Wednesday prior to the Clipsal 500 in Adelaide.