Big weekend for Slamfest in Portland

Big weekend for Slamfest in Portland 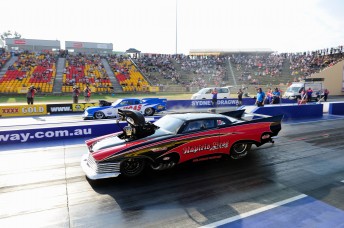 On Saturday Portland, Victoria a number of Australia’s leading Top Doorslammer drag racers will be taking to the one-eighth mile (300m) South Coast Raceway for the second round of the growing Slamfest competition.

“The elapsed time and speed records for the eighth mile distance have also been hotly contested of late, so that is sure to inspire some exciting racing,” he explained. “Last season John Zappia held both records before Victor Bray (ET) and I (speed) snatched them away in late 2012. At the last round in Heathcote I got my hands on the ET record as well so the boys will be gunning for me this week end.”

The Slamfest competition has expanded the number of events that the Top Doorslammer category races at by limiting itself to the shorter distance. It is attracting huge crowds at many venues that are starved of professional motorsport competition.

This weekend’s event will also see Matt Mingay’s Stuntz INC crew entertain the crowd and a live band at the completion of finals.

Racing begins at 11am, with gates to Portland South Coast Raceway opening at 9am.