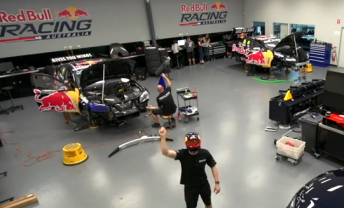 A scene from the Red Bull video

The livery that Triple Eight Race Engineering’s Red Bull-backed Holdens will carry in this year’s V8 Supercars Championship has been partially revealed by the team.

Triple Eight has been out at Queensland Raceway this week running in the swathe of new VF model Holden Commodores that it has built for Red Bull Racing Australia, Tekno Autosports and Lucas Dumbrell Motorsport.

The team’s official launch is set to take place in Sydney tomorrow morning.

See the video below