Maro Engel’s appointment to the #9 SP Tools Mercedes-Benz sees Erebus Motorsport continue the left-field approach to driver signings that was once the hallmark of Stone Brothers Racing.

Having given Jason Bright, Craig Baird, David Besnard, Marcos Ambrose, James Courtney and Shane van Gisbergen their first full-time gigs in the category, the Queensland-based outfit has selected the 27-year-old German to line-up alongside the now highly experienced pairing of Lee Holdsworth and Tim Slade.

Engel has bid farewell to his Monaco home and factory AMG contract to join Erebus, and arrives with a wealth of experience from categories including British Formula 3 and Germany’s DTM.

Speedcafe.com’s Stefan Bartholomaeus spoke to Engel about his decision to join the V8 Supercars Championship and the challenges that lay ahead.

SPEEDCAFE: Maro, the first time we saw you in Australia was in September last year when you came out to race with Erebus in the Australian GT Championship. That week coincided with the team announcing its V8 Supercars program. Did you have any thoughts at that time about being part of the V8 team?

MARO ENGEL: No. The reason for my race with Erebus in the Australian GT Championships in September was purely coming from AMG Customer Sports and the driver pool I was part of, to support Erebus here in their bid to win the championship.

We had a great run, it was fantastic. It was a privilege to work with the guys and it couldn’t have gone much better really. We got pole position, won the round, won one race and lost the other to Craig Lowndes. And if I was going to pick someone in the country that I was going to lose to it would have to be Craig Lowndes! We had a great race and he’s a great guy as well.

I really enjoyed the weekend, but there was absolutely no thoughts of V8s at that point.

SPEEDCAFE: You were at the Erebus V8 Supercars team announcement at Crown in Melbourne before heading to Phillip Island. What did you know about V8s at that point, and what did you think about what Erebus was trying to do? 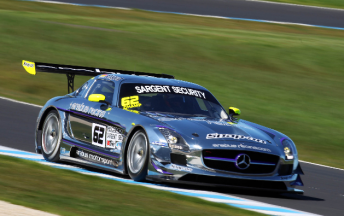 ENGEL: Look, obviously in Europe V8 Supercars gets quite a bit of coverage. I followed it and tried to catch the odd race when it was on. It was a category where I just thought ‘wow’. They’re obviously very fast in a straight line, I couldn’t believe the figures they’d show on the onboard cameras, and the racing is very close. But that was as much as I was following it. I knew who was where in the championship, but I wasn’t watching every race. It wasn’t possible with my time schedule.

Coming down here (last September) I obviously knew about the announcement and had a spectator role in that. I just thought what a great project, an ambitious project, and in my opinion the right people to head it up.

SPEEDCAFE: What was the process to get to where we are now then? Did Erebus go back to you directly? Did it go through AMG? How did it work?

ENGEL: At a later date, talks began about whether I’d be interested in racing the car. But before we could get to that obviously we had to see if I could drive these cars competitively and fast, which is why we did the test (at Queensland Raceway in Lee Holdsworth’s 2012-specification Ford Falcon last December).

The test was a great experience again and a testament to the Erebus V8 team who ran the car. Everything was extremely well prepared. Although the car had a lot less grip and more power then I’m used to it was a car that was really well engineered and was responding to exactly what the driver wanted from it. It was predictable and a really good and positive test for me, with a really good outcome.

SPEEDCAFE: Do you think it’ll be helpful coming into the category during a year when the technical rules have received a shake-up? The move to IRS, a bigger wheel and tyre package and so on must make it less daunting?

ENGEL: It’s a bit hard to say having not driven the new car yet. But I’ve seen the Car of the Future regulations, and while it certainly wasn’t the deciding factor in my decision to come down here, having everyone starting with a clean sheet of paper certainly isn’t a disadvantage for me.

Coming into a game that everyone has been playing for 10 years is always harder. So if the rules of the game changes, it’s got to be positive for a rookie. 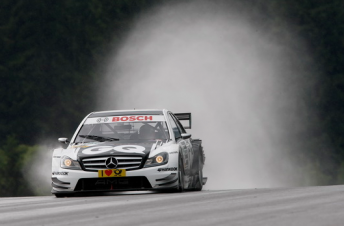 SPEEDCAFE: Obviously a lot of work has already gone into the Mercedes V8 Supercar, but do you think you’ll be able to bring a lot to the table during the development phase?

ENGEL: I would hope so, but the first priority will have to be to get me up to speed and running. I have two great team-mates (Holdsworth and Tim Slade) who are proven in V8s and are two really nice guys. I’m really looking forward to working with them. I have an experienced engineer (Chris Stuckey, formerly race engineer for David Wall at BJR), and the whole team has been great in getting me ready to race the car. But absolutely I’ll contribute to the development.

SPEEDCAFE: We’re talking a lot about the cars, but will learning a whole new set of tracks from scratch be the biggest challenge?

ENGEL: Yes. Having to learn the tracks will be one of the biggest or the biggest challenge for me. There are a lot of street circuits where you can’t get any running, so just learning those tracks in the limited time available will be difficult.

I generally learn tracks pretty quickly, but we have to be prepared that there’ll be some tracks that I learn quickly and some where I struggle a little bit more. I think we need to appreciate that I want to be successful here and I believe I will be successful, but it may take time.

SPEEDCAFE: We think of you as a DTM and GT driver, running on big, fast European circuits. But your years in British Formula 3 should at least have exposed you to some of the tighter, go-kart-like tracks we have here…

ENGEL: People have been telling me how I shouldn’t judge the Australian circuits on the basis of Queensland Raceway, but in my opinion it’s quite a good track actually. Of course it is not Spa-Francorchamps, but the track certainly isn’t bad – I’ve run on worst tracks than that!

I’m feeling very positive about this. I think there will be some really cool tracks to race on. Obviously Bathurst is probably the best track. In German we have a word, ‘non plus ultra’, which basically means the top of the list. That’s what I believe Bathurst is here. I’m very curious and looking forward to racing around here. 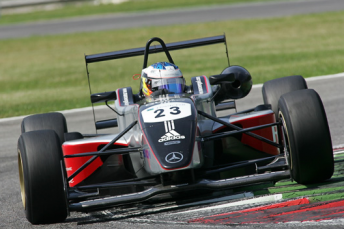 SPEEDCAFE: Is it a shame that you were only a spectator at the Bathurst 12 Hour with Erebus? Racing would have been a perfect chance to get some miles here, surely?

ENGEL: Well I only arrived in Australia on Sunday night (the week before the race), and I’ve had a lot of things to do and get sorted. I think it was a good choice for Lee and Tim to run the race. I’ll get my chance during the year.

SPEEDCAFE: Do you hope to be involved in any of Erebus’ GT racing? Or is the focus just on V8 Supercars?

ENGEL: I’d absolutely love to be involved in further GT outings for Erebus. The priority is V8s, absolutely, and we won’t let anything get in the way of that, but if the they are opportunities to race for Erebus in GT then I’d love to do that.

SPEEDCAFE: I know you have been doing bits and pieces as part of the AMG family, but having not had a full-time drive in anything last year, you must just be excited to be able to run a full campaign again?

ENGEL: Absolutely. Last year was a different challenge for me racing single events. A full-time race seat is great because you can really focus on the challenges ahead, to master them and to succeed. You’ve got a team that is set and you can work with and chip away and improve.

SPEEDCAFE: So is this a long term commitment for you here? Or could it be a way to springboard yourself back into a full-time drive in Europe?

ENGEL: This is absolutely what I want to do and where I want to be. I think it’s a great, ambitious and challenging project, just as much as it’s a challenge for me to be racing out here. I’m excited to be a part of it, and that’s why I want to be here.

We’ve communicated that it’s a multi-year deal. The plan is to work hard, go to Clipsal, see where we are and hopefully hit the ground running. Where ever we are we’re going to work hard to keep improving and hopefully have a competitive run. SPEEDCAFE: It must be hard to have expectations of how competitive you’ll be, particularly in the early part of the year, given the amount of unknowns with the car.

ENGEL: Yes. I haven’t even run in the car yet, forget about running with other cars in a competitive environment. I think at the official test day we might get a small idea, but it’ll be my very first day in the car. Even Clipsal, which will give us a better understanding of where we are, will be my first race.

it’s extremely hard to pin-point expectations, but personally I’d like to be as close as possible to Tim and Lee. They’re very good benchmarks for me.

SPEEDCAFE: When you were deciding on whether you wanted to come and do this, did you look at Alex Premat’s experience down here last year? He also came from a DTM background, and clearly it wasn’t easy for him…

ENGEL: Well, Alex has a great track record in Europe and of course I’ve followed what he’s been doing. But I can’t really comment on Alex’s season because there’s always more to a season then looking at the result sheets.

My focus will certainly be on myself. Yes, there’s certain factors in the backgrounds, but every driver is an individual, so my focus will be to improve myself with every outing and every lap.

SPEEDCAFE: Looking at the bigger picture here, V8 Supercars has talked a lot about pushing overseas and building an international following. Do you think that’s realistic?

ENGEL: Absolutely. I think V8 Supercars is a great category. The racing is really close, it’s great racing for the fans. It’s a respected category all over the world already. I believe that expanding into new markets will open up a lot of potential for the series. It’s such a great series, why wouldn’t you present it to other countries?

SPEEDCAFE: And having the new brands involved, both Nissan and Mercedes-Benz, must help with credibility and interest overseas?

ENGEL: I think it’s a great thing for the series. The more competition you have, the better in my opinion and having four brands on the grid is a great starting point. We obviously all look forward to seeing where we are. We’ll find out soon.