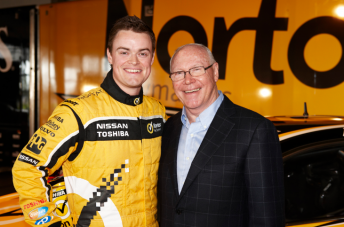 Australian touring car legend Allan Moffat believes that familiar characteristics of dedication and work ethic will see his son James make it to the top in V8 Supercars.

“He’s worked hard to get here, and by that I mean he’s done the hard miles, the many, many hard miles,” Moffat told Speedcafe.com of his son.

“A lot of people thought when I first came to Australia with my Trans Am Mustang that I came with a shower of million dollar notes from my family and had the best car in the world. What no one knew at the time was that I had 50 races at 50 different race tracks under my belt driving and getting the hard yards done in America.

“James has done the hard yards and if he hadn’t he wouldn’t be getting this opportunity. I’m very proud of his zeal and his workmanship and his taking it easy with the bottle in your hand on a Friday night. All of those things make a good race driver. It’s easy enough to be a flashy race driver, but it’s harder to be a good driver.”

“He definitely has,” he added when asked if James has shown the potential to make it to the top. “He’s shown the zeal that his father used to have, including walking right by me in the pits at various races last year because he’s just so focussed on getting on and doing the job that Dad was just part of the scenery. I thought ‘hmmm, that reminds me of somebody I know!’

“If you’re not focussed on what you’re going to do then how are you ever going to do a good job? What I like about what I see with Nissan is that they are dedicated to doing it, they have done a good job in the past  with Mark Skaife and Jimmy Richards, and if they don’t come up with the goods that they need immediately they’ll work on that, there’s no question.

“Some of my happiest days were when I worked for Mazda and ran the RX-7s in this country. The support that came from Hiroshima was nothing but superb.”

While Moffat championed the 5.0 litre, Ford versus Holden regulations when they were introduced in 1993, the four-time ATCC and Bathurst winner says that the Car of the Future regulations that have opened up the class to other marques couldn’t have come soon enough.

“The formula of just having Holden and Ford against each other was just going downhill,” he said.

“The best thing we can have is more manufacturers, and I’d be very surprised that if in a year’s time other company’s aren’t saying ‘hey, we can join this party’.

“What’s good about the rules is that the car company’s now don’t have to make 500 cars the way they had to in the 70s and 80s. That was a huge expense to make special cars. It drove the company’s crazy and was a huge inconvenience.”

CLICK HERE for more on the team’s driver/engineer combinations