Rick Kelly is on the hunt for a new personal helmet sponsor after Red Bull ended its seven-year association with the former V8 Supercars champion.

Due to Red Bull’s new commitment to Triple Eight Race Engineering, Kelly and the energy drinks giant have parted ways on amicable terms.

At today’s launch of Nissan Motorsport’s four-car Nissan Altima squad, Kelly stood beside his Jack Daniel’s-backed Altima with a chrome Arai helmet, with only minimal backing from another of his long-time supporters Oakley.

CLICK HERE for Speedcafe.com’s breaking story on the unveiling of the Nissan Motorsport team.

CLICK HERE for a gallery of images of Nissan’s four-car team. 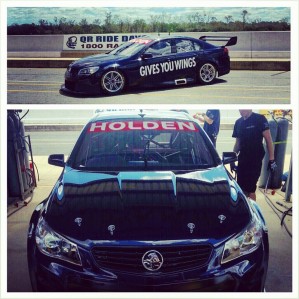 Kelly was diplomatic about parting ways with Red Bull.

“It’s a shame to lose them. I loved working with Red Bull over the last seven years of my career,” Kelly told Speedcafe.com.

“From my point of view, it was sad to see that relationship come to an end. They’ve got a big project now (with Triple Eight), and they have to focus on that. There wasn’t an opportunity for us to continue and that’s understandable.

“It also makes things a bit ‘cleaner’ for me, given that I represent Jack Daniel’s on the race track.”

While Kelly is a fan of his all chrome helmet, he is hopeful of replacing it with a new personal backer in the near future.

“When we started Kelly Racing, I had 13 personal sponsors on my helmet. I had great brands and worked with great people, but I soon realised there wasn’t enough time for me to spend looking after those relationships. I then went to the all-Red Bull helmet,” he said.

“In the short term, I was going to go back to my original design that I used to run in the old days, but I like the chrome that I’ve worked with for the past few years. It’s a good point of difference.”

Red Bull Racing Australia will officially unveil its first major foray into V8 Supercars in Sydney on Thursday. The team tested at Queensland Raceway yesterday and released a teasing image of the car via social media today (see image above right).

All 28 V8 Supercars will hit the track this Saturday for the official pre-season test at Sydney Motorsport Park.