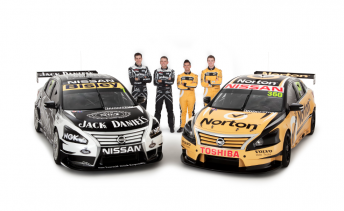 Nissan Motorsport has unveiled its four Nissan Altima V8 Supercars ahead of the 2013 V8 Supercars Championship.

The newest factory team in the V8 field will be spearheaded by Todd and Rick Kelly in Jack Daniel’s Racing colours, while Michael Caruso and James Moffat have been confirmed as the drivers of the two Norton 360-backed Altima L33s.

Todd and Rick Kelly will remain in their traditional #7 and #15 entries, while Caruso will drive the #36 car and Moffat the #360 Altima.

The cars and drivers were revealed at Melbourne Showgrounds in Flemington, Victoria.

It is the first time in 20 years that Nissan has competed as a factory outfit in Australian motorsport, and leading driver Rick Kelly said he is looking forward to the new challenges his team will face in 2013.

“Today is an incredibly exciting day for our team and actually it comes almost 12 months to the day after we first announced our partnership with Nissan,” said Kelly.

“Not only do we officially welcome James, Michael and Norton to Nissan Motorsport, but we also unveil our Nissan Altima V8 Supercars in race trim, including the first black and white Nissan Altima of our long-time friends at Jack Daniel’s, as well as marking the next significant step in Nissan Motorsport’s journey to the grid.”

The new Nissan Altimas will have their first public track time at Sydney Motorsport Park for the official pre-season test this Saturday.

CLICK HERE for a gallery of the team’s studio images