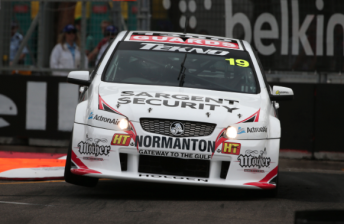 Eggleston Motorsport will make a return to the Dunlop Series in 2013, entering a two-car team.

After a spell in the Australian GT class, Eggleston will move back to the V8 development series after purchasing one of Tekno Autosport’s ex-Triple Eight Commodore VEs.

Eggleston confirmed to Speedcafe.com that he will not drive and will conduct a evaluation test at Winton next week to make a final decision on who will drive his Commodores.

The expanded team will see Eggleston Motorsport form a new partnership with Rachael Wagg and her expanding ‘Marque Management’ business.

Wagg says after purchasing the Triple Eight-built car and expanding its businesses, the aim is to win races.

“The aim is simple, we have invested in the best equipment because we want a car and driver combination capable of winning races and the championship,” said Wagg.

“Tekno spared no expense with their cars and I am confident that we have the right team to roll the car out at Clipsal with a race-winning set up.”

The opening round of the 2013 Dunlop Series will be held on the streets of Adelaide on February 28-March 3.