PIRTEK POLL: Will the Bathurst 12 Hour become one on the world’s great enduros?

PIRTEK POLL: Will the Bathurst 12 Hour become one on the world’s great enduros? 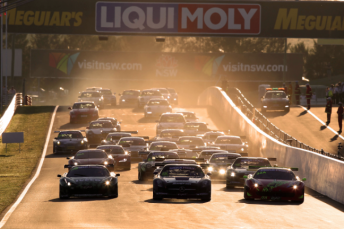 The start of the Bathurst 12 Hour

The 2013 Liqui-Moly Bathurst 12 Hour has been deemed a major success, with the most competitive line-up of GT entries competing in the race last weekend.

After 12 Hours of racing, Erebus Motorsport secured its first major victory on Australian soil, with the squad’s international line-up of Alex Roloff, Bernd Schneider and Thomas Jaeger winning the ‘once around the clock’ event.

CLICK HERE for Speedcafe.com’s final race report from the event.

The surge of entries – both from Australia and around the world – has prompted the likes of Radio Le Mans’s commentators John Hindaugh and Paul Truswell to say that the race has the potential to be one of the great sportscar endurance races in the world.

CLICK HERE for Speedcafe.com’s story regarding the future of the event.

Now in its third year as a GT race, the 2013 Bathurst 12 Hour was the best under its current regulations, but has it done enough to continue to grow?

Speedcafe.com wants your opinion in this week’s edition of the Pirtek Poll. Will the Bathurst 12 Hour become one on the world’s great endurance races?