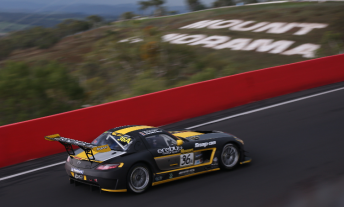 The weekend’s event featured a record 50 entries, 19 of which came from overseas, while a smattering of high profile drivers including Bernd Schneider and Mika Salo further underlined the race’s increasing stature.

Broadcasting the race to an international audience this year via the live internet stream were Radio Le Mans’s global endurance racing sages John Hindaugh and Paul Truswell, who are both convinced of the race’s potential.

“This part of the world does not currently have a destination endurance race,” Hindaugh told Speedcafe.com.

“With all due respect to Sepang and all of those races, the Far East and Asia, and in fact the southern hemisphere, doesn’t have a marquee event. This race has the potential to become it.

“There’s the potential here for a Nurburgring-like explosion of global interest for this race.”

Both were quick to point out that the Mountain circuit is a spectacular venue, even for those used to famed circuits such as Germany’s Nurburgring and Belgium’s Spa-Francorchamps.

“It’s a circuit like no other, so it’s not like any other race,” Truswell told Speedcafe.com of his impressions of the 12 Hour.

“It presents unique challenges to the drivers. You have to be so clean. You can’t afford a lapse in concentration even for a moment. We saw that repeatedly in (yesterday’s) race.”

“There’s no perfect line and it’s intimidating. It comes down to concentration and consequences .

“TV has improved over the years to the point where I wasn’t surprised by the elevation changes, but I was surprised by how narrow it is when you’re sitting in a saloon car.

“Mika Salo said to me that it’s incredible because it’s a street circuit on the top of a mountain. That’s exactly what it is.

“And the speed of the GT cars across the top is outrageous. I think the V8s (V8 Supercars) look good across there, but they’re losing four or five seconds to these cars. That puts it in perspective.”

Growing the race, the pair agree, is not about increasing the grid size, but rather working to attract further quality GT3 teams and drivers.

“You don’t need any more cars,” said Truswell. “If anything, you could have less cars and have it as a much more predominately GT race, which would greatly reduce the number of incidents.

“There is great potential with the timing of the Dubai 24 Hour race, but the problem at the moment is that it’s not a true double-header (the races were four weeks apart this year).
“If you want to raise the profile of both you’ve got to encourage the best names to do both races.”

The Bathurst 12 Hour’s association with the Dutch promotional company that looks after the Dubai race, Creventic, is expected to continue for next year.

Bathurst organisers will announce later today that their race will continue with its second Sunday in February date for 2014.