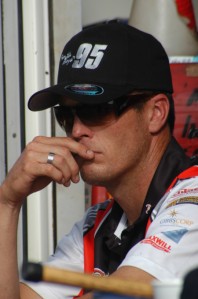 Whilst Farrell was dominant up front in the Diamond Bay Motorsport machine, all eyes were on Pestka. The young South Aussie, who draws support from Tim Slade’s V8 Supercar REC owner, James Rosenberg – fired past Lines and Kaeding to occupy his place on the podium.

Shane Stewart ended another night on the infield after coming together with his fellow American Kaeding. The pair had a heated exchange after the incident.

In the Championship battle, Lines edged closer to McFadden by virtue of being several places in front of the Australian Champion, the gap being 215 points now.

A two night show at Bunbury Speedway next weekend and then a double-header at the Perth Motorplex the weekend after will see the Series come to a conclusion.