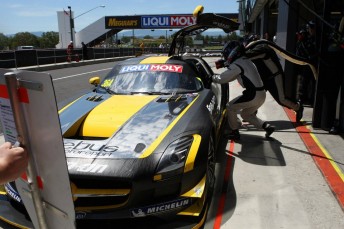 Erebus Motorsport is charging towards victory in the 2013 Liqui-Moly Bathurst 12 Hour, with its two Mercedes-Benz entries running a lap clear of the field at three-quarter distance.

The Bernd Schneider driven #36 SLS led the Lee Holdsworth piloted #63 entry by a full minute at the end of nine hours as the two cars continue to operate on offset fuel strategies.

The two cars ran line astern at the head of the field for an extended period prior to the #63 car making its ninth stop of the day towards the end of Hour 9.

The Clearwater Ferrari, which led at halfway, endured a series of setbacks in the third quarter of the race.

The car was awarded its second drive-through penalty of the day thanks to Mok Weng Sun turning Mark Eddy’s Audi around at Murray’s Corner in Hour 7, dropping it off the lead lap.

Two well timed yellows early in Hour 8 brought the 458 back into contention, before a subsequent full course yellow directly after Weng Sun handed over to Matt Griffin pinned the Clearwater car a lap adrift once again.

A flapping front-splitter towards the end of the ninth hour then proved a further setback for Griffin, dropping him to fourth behind the steadily driven #5 VIP Petfoods Porsche.

The eighth hour spelt the end of Phoenix Racing’s chances of victory. The Michelin-shod Audi had run with the leaders all day until mechanical issues saw it garage bound for four laps.

The troubled #6 MPC Audi’s day finally ended in Hour 8 when a rear hub failure saw Craig Lowndes stranded backwards on the entry to the Dipper.

See below for the full running order after Hour 9

See below for Speedcafe.com’s live Twitter updates from Hours 7 – 9

The race restarts with 5 hours and 55 minutes remaining #B12Hr

Baird pits the leading Clearwater Ferrari at the 6 hour 30 minute mark after an inspired double stint. Jaeger is the new leader #B12Hr

A disappointed John Bowe says he’s suffering from a sore neck after his McPhillamy crash in the Maranello Ferrari. He’s not happy with the Seat driver

Weng Sun has out-braked himself in the Clearwater Ferrari, tipping himself and the Dean Grant Audi into spins at Murray’s Corner

Both cars rejoin seemingly without damage, but the Clearwater entry is now in real danger of going a lap down to Jaeger #B12Hr

Jaeger pits with nine minutes to go in Hour 7 after a strong 33 lap stint. Kristoffersson goes back to the lead #B12Hr

Schneider is now in the #36 Jaeger Mercedes. Kristoffersson and Hackett are nose-to-tail at the front #B12Hr

Lowndes pits from seventh as Hour 7 ends. The Audi is five laps down after several dramas during the previous stint for car owner Salmon

Kristoffersson pits the Phoenix Audi. Weng Sun has also been in and out of the pits after a costly drive-through penalty for the incident with Grant #B12Hr

The Class D leading Dean Herridge Subaru is stopped on the circuit, thankfully off-line, just over the McPhillamy crest #B12Hr

Schneider leads from Slade (now in the Hackett Mercedes) and Weng Sun, who benefits greatly from this yellow having almost dropped a lap down #B12Hr

We’re left with three cars on the lead lap with almost five hours still remaining. The Phoenix Audi has not returned to the circuit #B12Hr

The VIP Porsche now runs fourth, one lap down. Klark Quinn is back behind the wheel after a solid effort from stand-in Kingsley #B12Hr

The Phoenix Audi returns to the track several laps down. The race restarts at the 7 hour 20 minute mark #B12Hr

Dean Grant pits under the yellow. The #9 MPC Audi is running in fifth place, albeit four laps off the lead #B12Hr

All of these yellows are good news for Clearwater Racing. Schneider and Slade are at least five seconds per lap faster than Weng Sun #B12Hr

Race restarts with 13 minutes remaining in the eighth hour. Jaeger and Slade lead the way #B12Hr

Lowndes confirms that his car broke its left-rear hub, pitching him into a spin that caused the last lengthy yellow. #B12Hr

Erebus Mercs both run 2:08.7s laps last time around. With Weng Sun stuck in traffic, they are 48s ahead just two laps after the restart #B12Hr

The Audis of Mies, Primat and Li are all four laps down, separated by 15s in the battle for fifth #B12Hr

Weng Sun’s minimum driving time is complete so he heads to pitlane. Fuel in, Griffin in, new Michelins on. #B12Hr

The Hunter Motorsport Porsche has taken the Class B lead after a long stop for the ASM example. The McElrea run car had broken a drive belt. #B12Hr

Quinn has temporarily moved up to third after the Clearwater car’s stop. Erebus Mercs now only cars on lead lap #B12Hr

The Erebus Mercs currently run 0.6s apart. They’ve been circulating line astern for almost half an hour since the restart #B12Hr

Jaeger heads straight to pitlane, Slade continues and takes the lead – ensuring the rest of the field remain at least one lap down #B12Hr

Quinn pits from third. Griffin will continue having been in recently. Mies pits from fifth #B12Hr

Race restarts with 3 hours and 30 minutes remaining. Slade leads Schneider, who has replaced Jaeger in the #36 #B12Hr

Slade, Griffin and Schneider are running just 13 seconds apart with 15 mins remaining in the ninth hour, but the Ferrari is a lap down #B12Hr

The battle for top Audi continues. The Hartley driven United Autosport R8 now holds fifth ahead of Eddy and Simonson.

Griffin continues to circulate in the troubled Clearwater Ferrari. Holdsworth meanwhile is back in the #63 car, taking over from Slade #B12Hr

Clearwater crew rip remainder of splitter from Ferrari. A relatively quick stop, but it won’t do much for the handling balance #B12Hr