Erebus leads the way at quarter distance in Bathurst 12H

Erebus leads the way at quarter distance in Bathurst 12H 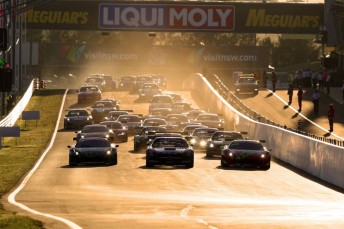 Slade, Salo and Baird all led the race during the opening hour

Just six cars remain on the lead lap thanks largely to the controversial handling of a full course yellow at the end of the second hour that saw the four lead runners waved by the Safety Car before the restart.

Jaeger led the Andreas Simonsen-driven Pheonix Audi by 12 seconds at the end of Hour 3 with Peter Hackett, Shane van Gisbergen, Matt Griffin and Marco Cioci rounding out the top six.

The excitement of the third hour proved a battle that emerged between the two leading Mercedes and the first two cars left a lap down after the Safety Car – the Warren Luff-driven MPC Audi and Allan Simonsen-driven Maranello Ferrari.

Hackett eventually elected to drop to the tail of the quartet, while Jaeger continued to hold off the determined duo.

The Maranello car had suffered an early scare when Mika Salo was involved in an incident that brought out the first Safety Car after just 20 minutes.

The #68 Motorsport Services Porsche spun at the exit of Griffins Bend after contact with the Ferrari, which escaped undamaged despite also rubbing the outside wall in the incident.

Another multi-car accident occurred not long after the restart. The Tony Quinn Aston Martin (which was only entered in the Australian GT component of the race) and David Russell-driven JBS Lamborghini attempted to overtake Chris Porritt’s Class C Aston at the top of Conrod. The resulting contact spat the two faster cars into the concrete walls on either side of the circuit.

Quinn was scheduled to step into the #5 VIP Porsche later in the race, but has now handed his drive to Matt Kingsley. The Porsche is running under protest following continued debate over the eligibility of its 2013 upgrade kit.

Following a lengthy clean up period, nearly 50 minutes of green flag running occurred before the full course yellows were required again following a heavy crash from the #16 Engstler BMW at McPhillamy Park.

Moments before the BMW’s incident, a seemingly harmless spin at Hell Corner for Peter Edwards crucially dropped the Maranello Ferrari a lap behind the then race leader Slade.

The biggest single-car incident meanwhile was saved for the #81 Dragonspeed Audi, which spun four times in the Chase during Hour 2 after appearing to have a problem with its right-rear corner.

See below for the full race order after Hour 3

See below for Speedcafe.com’s live Twitter updated from the first three hours of the race

The 2013 Liqui-Moly Bathurst 12 Hour is just moments away from a start. Tim Slade will lead the cars away from pole in the Erebus Mercedes.

Tim Slade (#63 Erebus Mercedes) leads at the end of the opening lap ahead of Craig Baird (#33 Clearwater Ferrari) and Mika Salo (#88 Maranello Ferrari).

Third-placed qualifier Baird challenged for the lead on inside at the first corner but thought better of it.

The #24 GWS BMW 335i, which has struggled with electrical problems all weekend, has stopped on the circuit.

Traffic is proving a major issue for the front runners. Baird now 3.5s ahead of Slade #B12hr

Replays show that the Porsche spun after moving into the path of Salo in the Maranello Ferrari, which has continued despite also touching the wall #B12Hr

The Porsche appeared to be trying to move out of the way of Slade when he touched Salo. Remarkably, the Ferrari has taken second from Slade in the process.

Richards (#48 GB Lamborghini) and Primat (#1 Phoenix Audi) both pitted under the Safety Car.

Baird pits the leading Clearwater Ferrari as the Safety Car continues to circulate.

Drivers being warned of oil on the circuit across the top. Restart imminent. #B12Hr

Oil has reportedly come from the #56 Motorsport Services Seat, which is now in the pits #B12Hr

Replays show Quinn being squeezed into the inside wall by the Chris Porritt Aston. The JBS Lambo had been on the outside of the three-wide squeeze and has hit the outside wall hard.

Slade and Roloff pit from second and third respectively. #B12Hr

Race organisers inform us that they’re working hard to increase the stability of the live feed. Stick with it, it’s going to be a big day…

Quinn and Murphy pit from second and third respectively after the conclusion of the 50 minute Australian GT Championship component of the race. The Maranello Ferrari has scored maximum points.

Conrod has been cleared and the restart will take place next time by. #B12Hr

The Erebus Mercedes entries are currently running ninth and 10th, with both Slade and Roloff double stinting. #B12Hr

Aston driver Chris Porritt says the accident with Quinn and Russell was “unnecessary” after the two faster cars tried to pass either side of him.

Salo’s lead is out to 20 seconds ahead of the already-pitted Primat Audi. Slade is up to third, a further eight seconds back #B12Hr

Slade takes the lead from Primat. The Mercedes’s last lap was a 2:10s, two seconds quicker than the Audi.

Mika Salo says there is no damage following his earlier touch with the wall at Griffins. Peter Edwards is now in the Ferrari.

Erebus Mercs running one-two as Roloff passes Primat at the approach of the 90 minute mark. #B12Hr

The earlier yellows have worked well with the strategy of starting Salmon in the Lowndes/Luff car. Salmon only 60s off the lead after 90 mins.

The Eric Lux-driven #81 Dragonspeed Audi has had a massive lose entering the Chase, spinning four times after appearing to have a left-rear wheel issue. Lux narrowly misses cleaning up the ASM Porsche on the way through the Chase. #B12Hr

Peter Edwards has spun the Maranello Ferrari at Hell Corner but rejoins unharmed. Edwards is now a lap down on race leader Tim Slade.

The #16 Engstler BMW has crashed at McPhillamy Park, almost taking out Weng Sun in the Clearwater Ferrari.

The third Safety Car is called at the 1 hour 53 min mark. Slade had enjoyed a 20s lead over Roloff #B12Hr

The leading cars all pit. Slade and Roloff exit the two Mercs in favour of Hackett and Jaeger. #B12Hr

The Clearwater Ferrari has pitted and will restart sixth with Griffin now at the wheel. It is the last car on the lead lap.

The SC restart occurred without the leader being at the head of the field after several cars were waved by. Only six cars are on the lead lap, but two of those are some 2 mins behind #B12Hr

Hackett, Jaeger, Andreas Simonsen, Van Giz, Cioci and Griffin are the lead lap runners. Luff the first a lap down.

Ciocci and Griffin are having to push to stay on the lead lap. The Irishman runs 2:07.03s that time by – the fastest of the race so far. #B12Hr

Luff is pushing the #6 MPC Audi hard in order to get his lap back. He’s lapping in the high 2:08s – two seconds quicker than the Mercs #B12hr

The two leading Mercs and the first cars a lap down, Luff and Allan Simonsen, are running nose-to-tail #B12Hr

Hackett has dropped to the tail of the four-car train. Jaeger now leads with the lapped Luff and Simonsen in pursuit #B12Hr

Hackett has quickly dropped almost five seconds back from the three tussling cars ahead. #B12Hr

The battle for second has hotted up with Hacket, Andreas Simonsen and Van Gisbergen separated by just two seconds #B12Hr

The #54 Donut King Nissan has lost its right-rear wheel and is limping back to the pits as the third hour comes to a close.

The Corvette has spun at the approach to McPhillamy but rejoins. Allan Simonsen pits the Ferrari having failed to gain his lap back in that stint.