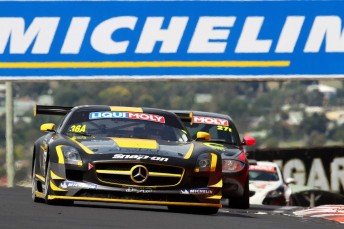 Erebus Motorsport has taken victory in the 2013 Liqui-Moly Bathurst 12 Hour with its #36 Mercedes of Alex Roloff, Bernd Schneider and Thomas Jaeger.

The car’s non-seeded driver Alex Roloff held his nerve at a rain-hit Mount Panorama to take the chequered flag over a lap ahead of the Craig Baird-driven Clearwater Ferrari.

The Baird/Matt Griffin/Mok Weng Sun Clearwater crew managed to improve on their third placed finish of last year despite being handed three drive-through penalties and a mechanical black flag during a fraught race.

There had been little to choose between the #36 Mercedes and the sister #63 machine of Lee Holdsworth/Tim Slade/Peter Hackett throughout the day before Holdsworth damaged the car’s steering following the first heavy shower in the penultimate hour. The car was repaired and eventually finished sixth.

The VIP Petfoods Porsche of Shane van Gisbergen/Klark Quinn/Matt Kingsley took third, with Kingsley a last-minute stand-in for car owner Tony Quinn after the Queenslander crashed his Aston Martin in the first hour.

The Christopher Mies/Mark Eddy/Marc Cini/Dean Grant  #9 Melbourne Performance Centre Audi rounded out the top five having fallen four laps off the pace throughout the day.

Punctuated by a record 15 Safety Car periods, the race proved cruel for several of the fancied entries, including the rapid #88 Maranello Ferrari of Allan Simonsen/Mika Salo/John Bowe/Peter Edwards.

The car was nudged into the wall by a backmarker early in the first hour and, while initially continuing untroubled, a trip to the garage with collapsed front suspension during the fourth hour followed. The team’s day eventually ended  when Bowe suffered a sizeable incident after more contact with slower runners at McPhillamy Park.

The #6 Melbourne Performance Centre Audi of Craig Lowndes/Warren Luff/Rod Salmon also had its challenge fall during the first six hours, with car owner Salmon brushing the wall while trying to keep the car in a competitive position against the faster runners.

The first of the fancied entries to strike trouble however had been the David Russell/Peter Kox/Roger Lago #23 JBS Lamborghini, which crashed in a three-wide squeeze on Conrod that also claimed the Quinn Aston (which had been running the first 50 minutes in order to score Australian GT Championship points).

There was heartbreak at the opposite end of the race for United Autosports, whose Audi had been set for a sixth place finish until an otherwise outstanding Brendon Hartley was caught out by the conditions at the top of the Mountain in the final minutes. Contact with the wall at the inside of Sulman Park damaged the rear-suspension of the R8, rendering it a non-finisher.

Class B was taken comfortably by the Steven Johnson/Jonny Reid/Drew Russell Hunter Motorsports Porsche after the McElrea Racing-run #12 entry of Alex Davison/James Davison/David Calvert-Jones Porsche was crashed by Calvert-Jones in the 10th hour.

See below for Speedcafe.com’s live Twitter coverage from the final three hours

Brendon Hartley brings the United Autosport Audi into the pits from fifth place. An impressive Bathurst debut from the Kiwi. #B12Hr

The splitter-less Griffin continues to run fourth but can make no impression on third-placed Quinn. Clearwater Ferrari nearly two laps down.

Cioci pits from eighth after a strong stint behind the wheel of the AF Corse Ferrari. Early dramas were very costly for this team. #B12Hr

Schneider pits the lead car at the 9 hour 30 mark. He had a 75s advantage on team-mate Holdsworth #B12Hr

Calvert-Jones is parked backwards in the fence at The Elbow. Safety Car number 12 called #B12Hr

Griffin is back up to third in the Clearwater Ferrari following a pitstop for the VIP Porsche, which is now being steered by Kingsley #B12Hr

The fifth-placed Phoenix Audi is now the only car running four laps down, with Cini and Patterson both five adrift #B12Hr

The clouds continue to roll in with 2 hours and 10 mins to go. Still plenty warm outside though. #B12Hr

A drive-through for fifth placed Kristoffersson. Seventh placed Cini also recently trundled by after overlapping on the restart #B12Hr

Reports coming in that rain is very close by #B12Hr

Schneider leads Holdsworth by 2s at the end of Hour 10. Griffin a lap and 18s further back in third #B12Hr

Griffin pits the Clearwater Ferrari and hands over to Baird #B12Hr

Schneider pits under the yellows, putting the two Mercs back onto a very similar fuel sequence #B12Hr

Track is looking very greasy at the top of the hill. It will still have good temperature in it though. Entire field still on slicks #B12Hr

Race restarts 25 minutes past the hour. Baird is holding Schneider at bay to ensure he doesn’t go two laps down #B12Hr

It’s bucketing down at the top. Cars are crawling, almost stopping. #B12Hr

Van Giz goes by Schneider and Baird and then sails through the tarmac run-off at Skyline. #B12hr

Leaders are still crawling back to pitlane. Phoenix Audi dived in for wets before the restart #B12Hr

Front-runners make it to pitlane without damage. #B12Hr

The sun pops back out as the field rejoins on wets. Full course yellow still out for the stranded #27 and #13 BMWs #B12Hr

Remarkably, the only real consequence from all that chaos was Van Giz passing Baird for third #B12Hr

Erebus did manage, however, to put the Van Gisbergen and Baird cars a second lap down in the tyre change #B12Hr

Schneider runs a 2:21.5s, showing that the track has dried very quickly following the deluge #B12Hr

Schneider pits and hands over to Jaeger. Stays on wets #B12Hr

The Phoenix Audi is up to fourth at the expense of the #63 Mercedes, which is about to rejoin the race #B12Hr

Slade is in the #63 Mercedes, which has rejoined on wets #B12Hr

Now Baird swings the Clearwater Ferrari into pitlane from second place. The Kiwi moves back to slicks #B12Hr

Roloff puts Baird two laps down once again. The latter has, however, rejoined still ahead of the VIP Porsche #B12Hr

Baird takes one lap back immediately – diving by as they plunge down through Sulman Park. Roloff still on wets #B12Hr

Clearwater Ferrari now being shown a fourth black flag for the day, presumably for an issue in the pitstop #B12Hr

Baird pulls straight in to serve the penalty. He loses second to the VIP Porsche as Roloff pits for slicks and a splash of fuel #B12Hr

Remember that the eligibility of the SVG driven Porsche has been appealed, meaning the results will not be final #B12Hr

Timing screen was slow to update earlier. SVG is only 1 lap and 1 minute down on the leader. #B12Hr

Further heavy rain reported in nearby Orange. Slade, meanwhile, has been handed a black flag #B12Hr

More rain arriving at the top of the Mountain. Big pressure on race leader Roloff, who is the amateur-classed driver in the #36 Mercedes #B12Hr

Baird has the gap to fellow Kiwi Van Gisbergen down to 10s with 25 minutes to go. #B12Hr

Roloff is cruising around in the lead car. Lost five seconds to SVG on last lap, but still has a 1 lap and 40s buffer #B12Hr

Light rain coming down once again. SVG dives into the pitlane. Roloff and Baird still on track #B12Hr

Roloff pits for wets with just 11 mins to go as the rain comes down again. Baird in too. #B12Hr

Roloff runs wide at Murray’s Corner but stays on the circuit. He leads Baird by a lap and 27s with 7 minutes to go #B12Hr

Brendon Hartley has damaged the United Autosports Audi at the top of the Mountain. The car was running sixth but is limping to the pits #B12Hr