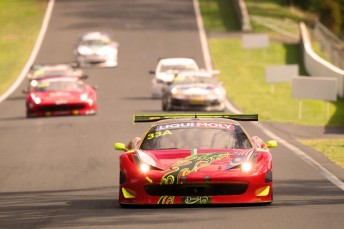 The Clearwater Ferrari leads at halfway

The 2013 Liqui-Moly Bathurst 12 Hour has developed into a three-way fight between the Clearwater Ferrari, Erebus Mercedes and Phoenix Audi squads at its halfway mark.

The Craig Baird-driven Clearwater Ferrari held the lead at the end of Hour 6 as the race restarted from its eighth Safety Car period.

Clearwater’s lead exists despite the car having to complete a drive-through penalty early in the fifth hour after being judged to have overlapped on a Safety Car restart.

Lee Holdsworth also befell the same fate in the #63 Erebus Mercedes, temporarily putting the #63 Mercedes off-sequence on fuel strategy with its key rivals.

Baird was the star of the midday running, scything from fifth place to the lead after taking over from Irish co-driver Matt Griffin.

Bernd Schneider had earlier made his mark on the race during his first stint, occasionally dropping into the 2:07s bracket as he led much of the fourth hour.

The second quarter of the race was a disastrous one for two of the three Ferraris, with the Maranello and AF Corse 458s both going to the garage with mechanical problems in Hour 4.

The Italian entry fell seven laps off the pace with its dramas, while the Maranello car eventually retired after a high-speed incident for John Bowe at McPhillamy Park.

Things were little better in the Melbourne Performance Centre Audi garage. The car dropped off the lead lap due to the large period of green flag running occurring when car owner Rod Salmon was at the wheel.

A drive-through for pitlane speeding cost further time before the Audi eventually went to the garage following a brush with the wall.

The #48 GB Galvanizing Lamorghini also spent time in the garage during Hour 6 as the M Motorsport crew dealt with a gearbox issue.

CLICK HERE for Speedcafe.com’s previous update from the end of Hour 3

See below for the running order at halfway

See below for Speedcafe.com’s live Twitter updates from Hours 3 to 6

The fourth Safety Car of the race has been called seven minutes into Hour 4. Leader Jaeger pits #B12Hr

Jaeger and Hackett pitted immediately when the Safety Car was called, while Andreas Simonson and Van Gisbergen are now in the lane. #B12Hr

The race has restarted at the 3 hour 25 min mark. Andreas Simonson leads Schneider, Holdsworth, Cioci, Allan Simonsen, Griffin, SVG and Luff – all of whom are now on the lead lap #B12Hr

Tony Quinn will not drive the VIP Porsche after his earlier crash in the Aston. He will be replaced by Matt Kingsley.

Schneider has taken the lead from Andreas Simonson. The lead runners had to deal with an expiring Sherrin BMW on the previous lap. #B12Hr

The Maranello Ferrari is going to the garage with a collapsed right-front corner. #B12Hr

The fifth Safety Car of the race has been called at the 3 hour 40 minute mark with the #65 Daytona Coupe stopped on the circuit.

As expected, the #30 Hunter Motorsport and #12 ASM Porsches are battling it out for Class B honours, currently ninth and 10th outright.

Schneider isn’t messing around in his first stint – setting the #36 Mercedes’ fastest lap last time by, a 2:07.74s

The Corvette’s troubled day continues, with Capelli limping the Trofeo Motorsport entry into the pits. It’s currently 11 laps down in 27th

Schneider’s lead is out to 22s over Simonson. The German continues to dip into the 2:07s when in clear air #B12Hr

Holdsworth meanwhile has had an unexpected trip to pitlane, dropping from third to fifth. #B12Hr

The sixth Safety Car is now called at the 4 hour 13 min mark, leaving Schneider to lead Simonson to the pits #B12Hr

Luff and Griffin also pit from third and fourth respectively. Holdsworth cycles to the front #B12Hr

Griffin returns the Clearwater Ferrari to the pits having previously served a drive-through. #B12Hr

Baird has taken Salmon for fifth. The latter needs to complete around 70 more minutes before Luff and Lowndes can take it to the end #B12Hr

Baird is now up to second, passing Roloff with 15 minutes remaining in Hour 5. Holdsworth leads by 8s #B12Hr

Gap at the front between Holdsworth and Baird is now under four seconds. #B12Hr

Baird has now put the Salmon/Lowndes/Luff Audi a lap down. Just four left on the lead lap #B12Hr

The Holdsworth car rejoined in fourth following its stop. Hackett currently at the wheel and needs to push if he’s to stay ahead of Baird #B12Hr

Baird’s lead over Roloff is edging towards 30 seconds. Kristoffersson is just 5s further adrift in third, while Hackett is now lapped #B12Hr

Salmon has served a drive-through for pitlane speeding, dropping the #6 MPC Audi further away from the leaders #B12Hr

Baird has pitted the Clearwater Ferrari, handing the top spot back to Roloff #B12Hr

Roloff heads to the lane just one lap after Baird. Kristoffersson follows.

Baird is still in the Clearwater Ferrari and now leads once again from Thomas Jaeger, who has replaced Roloff #B12Hr

The #48 GB Galvanizing Lamborghini has gone to the garage. It was running 10th, five laps down #B12Hr

Having now reached his minimum driving time, Salmon pits the #6 Audi for the lead time in half an hour #B12Hr

The Maranello Ferrari is currently facing the wrong way between McPhillamy Park and Skyline. John Bowe has stepped out of the car #B12Hr

The Salmon Audi meanwhile has not returned to the track following its last pitstop. #B12Hr

The Maranello incident has triggered the race’s seventh Safety Car, 5 hours and 37 minutes in #B12Hr

This yellow works poorly for the Clearwater Ferrari, which is on old tyres and loses its substantial lead #B12Hr

Third-placed Hackett has used this yellow to top off on fuel. The #63 has been off-sequence since its drive-through penalty. #B12Hr

Current order ahead of restart: Baird, Jaeger, Kristofferson and Holdsworth. Kingsley is fifth, one lap down #B12Hr

The #67 Motorsport Services Porsche has spun at Forrest’s Elbow and is stranded. Safety Car number eight is called as the seventh hour approaches #B12Hr