Sebastien Ogier clears out in Sweden

Sebastien Ogier clears out in Sweden 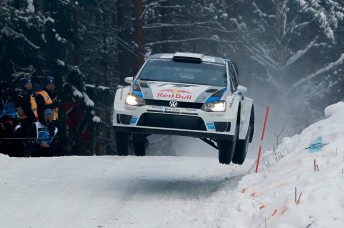 Sebastien Ogier has been the dominant force on the opening day of Rally Sweden charging his Volkswagen Polo R WRC to a 31.4 second lead over fellow Frenchman Sebastien Loeb.

Overall in the opening leg Ogier took five stage wins from the eight contested. Key to his pace was his 17th road position; a place he chose after setting the fastest time in pre-event qualifying.

“It’s a really good feeling. This morning wasn’t perfect but it was enough with a good road position. This afternoon was perfect.”

Citroen’s Loeb and Jari-Matti Latvala (VW) battled all day for best of the rest. Four times the duo swapped positions but an intercom problem for Latvala late in the day meant Loeb got in front, albeit by less than two seconds.

“The road is cleaning because the times behind me are faster,” said Latvala.

“Tomorrow our start position will be closer to the others.”

Mads Ostberg, in a Qatar M-Sport Fiesta RS, took a stage win. However, he took a 20sec road time penalty after stopping to fix a leaking water pipe; he is fourth, 42.8sec from the lead.

“We have good speed and we should be able to catch Loeb and Latvala tomorrow, but Ogier is just too fast,” said Ostberg.

Behind Ostberg in fifth is Evgeny Novikov, ahead of former WRC Academy driver Pontus Tidemand with Juho Hanninen in seventh.

Dani Sordo is 11th after getting stuck in the snow.

It was far worse for pre-event favourite Mikko Hirvonen who had a shocking start to his Rally Sweden campaign just one kilometre into the opening forest stage.

“I was on a fast right-hander when the rear went a bit wide,” said Hirvonen.

“I think somebody had gone off before us and there was a gap in the snow bank. We dropped slightly into a ditch but it was enough to send us into a spin. We rolled once, gently over the snow.”

“There were only two spectators nearby when we went off and so it took us a long time to try and get the car out. Four or five more people came along soon after. I must say thanks to them for helping. In the end it all came down to manpower.”

Hirvonen did win the day’s final stage, but is just under 24 minutes off the lead in 30th place.