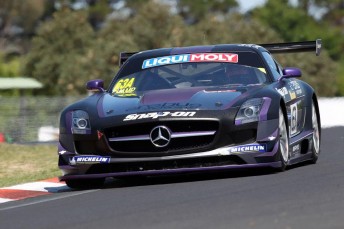 Erebus Motorsport has ended the first of two qualifying sessions for the Liqui-Moly Bathurst 12 Hour at the top of the order after a penalty for the pace-setting Maranello Motorsport Ferrari.

Lee Holdsworth’s early effort of 2:06.27s in the Mercedes was later beaten to the tune of 0.78s by the Allan Simonsen-driven Ferrari – a time which will be disallowed under the race’s 2:06.0s minimum time regulations.

Breaking the benchmark, which is in play during the pre-race sessions to help the class entries make the 130 percent qualifying cut-off, will also earn the Maranello entry a 50kg weight penalty for the remainder of the event.

The car’s second best time of 2:06.4s was good enough for second fastest ahead of the Matt Griffin driven #33 Clearwater Ferrari on 2:06.9s.

The #23 JBS Lamborghini was just 0.08s further adrift in fourth, with the #9 Network Clothing Audi fifth.

The majority of the outright contenders cycled through their entire driver line-ups during the 90 minutes after an early flurry of fast times when the ambient conditions were at their coolest.

The session was punctuated by three red flag periods, the first of which was called in the opening moments after the #9 Audi stopped on the circuit with battery issues.

It took just 20 minutes for the car to return to the circuit, with two-time defending race winner Mies soon joining the heavy-hitters in the 2:06s bracket.

The session was also halted at the 30 minute mark after Greg Murphy crashed the #29 Trofeo Motorsport Corvette while negotiating lapped traffic at Forrest Elbow.

Another incident at the Elbow, this time a clash between the Ivo Breukers-driven #3 Racer Industries Astra and the exit wall, caused the final stoppage with 25 minutes remaining.

Steven Richards was lucky to survive a late spin at The Cutting in the #48 Lamborghini – missing the concrete before completing an awkward multi-point turn in order to rejoin.