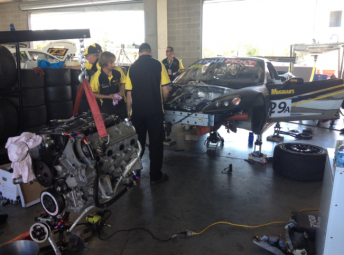 The Corvette being worked on in the Trofeo garage

Murphy made heavy contact with the outside wall at Forrest Elbow just 30 minutes into the 90 minute Qualifying 1 session this morning following a touch from the #19 Sherrin BMW 135i.

The incident saw the BMW nudge Murphy into a spin as the Kiwi swept around the outside at the right-hand kink on the way into the Elbow.

Substantial right-front damage saw the American muscle car garage bound for the remainder of the day, ensuring co-drivers Ivan Capelli and Jim Manolios will head into the race with only limited practice laps.

“Unfortunately it broke the engine cradle/cross-member, which is time consuming fix.

“The rear of the car is not too bad even though it hit the wall after being hit by the Beemer.

“The biggest issue is that Jim and Ivan missed out on two sessions which we had a big plan for.

“We’ll just play it as it comes,” he added of the race.

“It’s probably going to take two or three stints in the car for Jim to get comfortable – there’s a lot of time that he needs to find.

“Realistically we’ve got to go as fast as each driver can go, stay out of trouble and see where we end up.”

Despite the incident, Murphy says he’s enjoying his first event as a GT driver.

“It’s a great event and the car is really cool to drive,” he said.

“It’s not the latest model but it’s good fun to drive. There’s no question it’s fast up and down the hill, and just being in something different is an enjoyable experience.”

Murphy’s best time before the incident of 2:08.40s was good enough for 11th on the grid.

It is expected that Murphy will once again share with car owner Manolios at the second round of the Australian GT Championship at the Clipsal 500 Adelaide later this month.