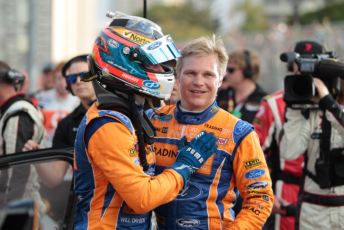 The 46-year-old Finn has competed in the V8 Supercars Championship’s Armor All Gold Coast 600 in each of the three occasions it has run to its international co-driver format, taking out the Sunday race last year alongside FPR star Will Davison.

Salo is learning the Mount Panorama circuit this weekend in the Liqui-Moly Bathurst 12 Hour, where he is racing a Maranello Motorsport Ferrari 458 alongside Allan Simonsen, John Bowe and Peter Edwards.

Salo is hopeful that his Formula 1 commitments, comprising of Finnish television duties and a guest steward role with the FIA, can be eased so that he is free to race on the October 10-13 weekend, which clashes with the Japanese Grand Prix.

“That’s the plan, yes, it was the point for me to come here (this weekend),” Salo told Speedcafe.com of racing with FPR in this year’s 1000.

“I talked with FPR last year and we decided I’d do Bathurst also, and the only way to learn the circuit for me was to come and do the 12 Hour race.

“I’d hope I could do all three races (Sandown, Bathurst and the Gold Coast) if I could under the rules, but there is some clashes with the Formula 1 and I have some commitments there. But I hope I can get around those.”

Salo says he enjoys the Australian cars, and is hopeful of once again linking up with Davison.

“My plan when I stopped full-time racing was to pick some nice races, as well as staying home a little bit also,” he said.

“It (the V8 Supercars Championship) is really good fun, it’s a great team and Will Davison is a great guy. I think the cars suit me also.”

FPR is yet to confirm any of its endurance drivers for this season. The team’s plans are certain, however, to include Dunlop Series front-runner Chaz Mostert, while team stalwarts Steven Richards and Dean Canto are both expected to return.

FPR team principal Tim Edwards declined to comment on any aspect of his team’s endurance line-up when contacted by Speedcafe.com.

Meanwhile, Salo is expecting to continually improve his performance around Bathurst as this weekend progresses, with limited practice time in the four-driver squad far from ideal.

“I think my best laps will be at the end of the race,” he said.

“I was learning something every lap in the practice and I’ve only done a few laps so far because we had some problems early on (with the tyres).

“A 12 Hour race with these GT cars is not an endurance race it is a sprint and you need to be on it from the beginning.

“But Allan will take care of the qualifying tomorrow and I’ll do some more practice laps. I’m sure we’ll be fine.”